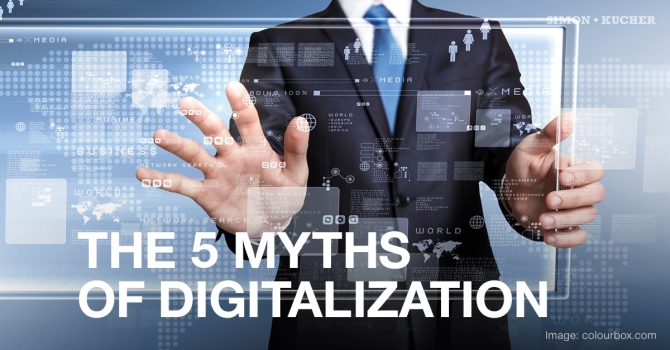 Digitalization is the number one topic nowadays. Everyone is talking about it, but most people are still trying to figure out what it really means. Digital technologies impact all levels of our society and disrupt the way we do business, so it’s no surprise that many business leaders are unsure of what to do next. In this article, we shed some light on what digitalization means for successful businesses and squash five digitalization myths that we regularly encounter.

Myth No. 1: Digitalization is an IT topic

False. Looking at digitalization as exclusively an IT topic is too shortsighted. Digitalization is much more than a software update, and it isn’t a box you can check off by simply hiring a CIO or CDO. That’s not how it works.

Digitalization impacts many levels of a company. Amongst others, it increases process efficiency and improves data transparency, and of course it should help boost your topline. When done properly on the customer-facing side of your business, digitalization can give you a tremendous edge over your competition. That means you tap into new digital revenue sources, set up new business models where necessary, and optimize your acquisition funnel so that it attracts, converts, monetizes and develops customers. The key questions in all of this are “what is commercially useful? Do your digital(ly enabled) products add value for customers? Can you monetize them? How do you optimize channel management and sales dialogs, etc.?” All this is commercial, strategic, and relevant to the core functions of your business – much more than just IT.

It’s easy to fall into the IT trap, as for a long time IT seemed the logical place in the company to start. And as top management is often unsure of what exactly needs to be done regarding digitalization, hopes rely on “collecting data and doing something (anything!) with it”. Or the decision is made to develop an app. From this perspective, digitalization seems like an IT topic, but this approach is bound to fail.

When it comes to making digitalized offers a success, you need to apply all your experience and personal knowledge about customers, markets, and competitors. Only in doing so will you fully exploit the potential of digitalization. Even Google isn’t immune here, which was evident in the limitations of its Google Glass product. It came with all sorts of problems linked to its use and didn’t offer clear value to the customer. Just because it was technically doable, it didn’t make it successful.

Although Google is not the average business, other companies also need to take note. It’s of course clear that IT has to be part of all digitalization efforts. Things will not work out without the IT department, as they know what can be implemented how, when, and at what cost. IT does have to sit at the table. But not alone, and not at the head of it.

Myth No. 2: Every company must completely reinvent their business model to survive in a digitalized world

False. Not everyone. Some need to, others don’t. Not all companies are created equal, so why should they all react in the same way to the impacts of digitalization?

The necessary extent of change depends on a variety of factors: How far along is your industry in terms of digital transition? How “digital” are your customers’ needs and preferences? How successful are you in continuing to do business the way you’ve always done? And what are your competitors doing? Are there new digital competitors looming on the horizon? Often, the best way to act is to make an evolutionary change in small steps, rather than a big bang revolution.

As sharing cars instead of owning them is becoming a big trend in metropolitan areas, all OEMs have to come up with car-sharing and mobility concepts that are very different from selling cars. Under the Mercedes Move Me brand, Mercedes Benz offers numerous mobility concepts, including car2go (“traditional” inner city car-sharing), mobility and connected car apps, classic car rental, and partnerships with chauffeur provider Blacklane, myTaxi, and bus and train service providers. Sure, today this is only a small part of Mercedes’ or any OEM’s revenue. But as metropolitan mobility continues to change, car sales are likely to drop, and car manufacturers will feel a greater need to drastically transform their revenue models.

In other industries such as fashion retail, it seems very unlikely that consumers will stop buying their own clothes. Here, the challenge for retailers and brands is more in managing online and offline channels in the right way, and creating a seamless customer experience. Optimizing the sales dialog, integrating brick-and-mortar stores with e-commerce offers, attributing revenues between channels, etc. does not mean reinventing the business model, but requires a lot of management skills and commercial savviness nevertheless.

So don’t be mistaken ‒ we’re not saying some industries shouldn’t or don’t need to change. But adopting digital transformation is not a yes or no, black or white, all or nothing decision. There are many facets between sticking to what you’ve always done and completely reinventing your business model. Every company needs to check if their business model is still “future-proof”. If yes, keep it, refresh it, or adapt it. If not, throw it overboard and reinvent it.

Myth No. 3: Digitalization means you must use the most advanced new technologies

False. Experience shows that generally it is the new and smart use of existing technologies (e.g., smartphones, GPS data, rating software, etc.) that drives success. Think of Uber – a big part of its success is due to the convenience of its offers: get the app, tap, see everything you need, tap again, and the deal is done.

The place where a certain technology is used makes a big difference. Do you need the best, cutting-edge sensors if you work in the Internet of Things and Smart Home area and want to ensure that various appliances communicate with each other without a glitch? Sure. But at the end of a process, there will be a user interface. And if this is too complicated or if it requires an inconvenient process to deal with this interface, no one will use it. So here, it is better to stick to technologies that most people already possess (smartphone, apps), and to work on convenience aspects.

False. Ultimately, you need to fully embrace digitalization and its implications. But not all in the beginning. Digitalization is a journey, not a light switch, and has many aspects, internal and external, that cannot all be tackled at the same time.

Of course it depends on how digital your company already is. If you operate an online platform, then your company may already be 80 percent digitalized, and you can gain more efficiency or create more customer value by going the remaining 20 percent of the way. Microsoft for example, undisputedly a high-tech and quite digital company, only completed the shift to a “mobile-first, cloud-first” company in the summer of 2015, when CEO Sataya Nadella broke away from Steve Ballmer’s way of doing things. But many established companies are still pretty old-fashioned and analog. They do some e-commerce here and there, but the bulk of the business comes from traditional channels. If you work for such a company, don’t set out to reinvent everything simultaneously, e.g. from your ERP system to the hiring process and how you sell your products. Set your priorities right, and start your journey step by step.

“Now is the time to act!” Yes. But acting means applying common sense and commercial savviness to the situation. Slice down your digital transformation into palatable bits, differentiate between internal and customer-facing processes, and move along at the right speed. Don’t lose your customers, your employees, or your processes on the way.

Myth No. 5: Following the market leader is the right approach to digitalization

False. Successful companies and their top management are generally most averse to change. Why? Because the current system is working out well for them.

Most companies change when there is pain or pressure to do so, and unless new competition poses a threat, incumbents rarely feel the need to reinvent themselves. They also have a lot to lose, e.g. established revenue streams, profits, structures, and processes, and need to make heavy investments in IT systems, switch programs, and hire employees with a different perspective and skillset. So no wonder this change is generally driven by startups without legacy business, purely digital players, or the not-so-well-off established players in the market who see more opportunities than risks in going (more) digital.

That doesn’t mean the market leaders can lazily stay in their comfort zone. They need to keep their eyes wide open for new competition, be it small startups or established companies doing something differently than before, new “killer apps” that impact their business, or shifts in customer behavior and expectations. Walmart is no exception here. Given their longstanding position as the leading retailer in the US since the 1960s, their e-commerce shop and revenues were significantly lagging behind Amazon and Staples in 2011. Only then they realized they had to change if they wanted to stay on top (and they successfully shifted towards digitalization). The same goes for the traditional German mail order company and market leader, Otto. They definitely needed a wakeup call from online retailers before they started to change. Without it, they might have stayed where they were, comfortably serving an ever ageing customer base that still uses traditional mail order. The other, non-leading market players, however, need to look even closer into possible new business models and improvement potential based on digital technologies. Their standard approach of following the incumbents’ lead doesn’t work when it comes to digital transformation. However, if they are fast and do it right, they will be in an ideal position to overtake the market leader, with a fresh and digital approach to doing business. Digitalization can be a big opportunity – not only a threat.