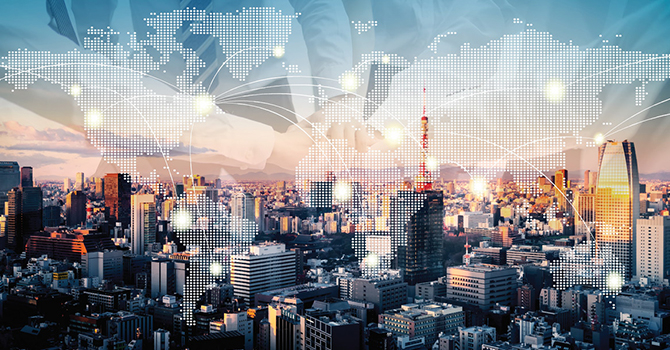 Post-launch NHI price recalculation in Japan can feel unavoidable. However, most of the time the resulting price cut can be mitigated – or even avoided. How? Read on...

...there was a manufacturer that expertly navigated through the Japanese P&R system. This manufacturer breezed through negotiations with the Ministry of Health, Labour and Welfare (MHLW), and achieved a price that reflected the true value of what would become their blockbuster drug. Little did the manufacturer know, there were dark times ahead, for MHLW had become wary of the success of the drug. With each new indication, sales for the medication grew and grew, until the MHLW could accept it no longer. And so, price recalculation happened. Fast forward many years later, and the price of the drug is only a fraction of what was first achieved at launch.

Unfortunately, this story is not a mere fairytale. A cautionary tale, maybe, for this situation happens time and time again in Japan.

The Japanese healthcare system is a nuanced system. National Health Insurance (NHI) launch pricing decisions are made within the framework of official pricing rules, although payers have substantial freedom in interpreting them. This means payers are able to be flexible in the applicability of the rules to produce a price at launch that is in line with both the official rules and payers’ willingness to pay.

However, there is a time and place for flexibility in Japan, and that is at launch. Post-launch price recalculations, on the other hand, are made following strict, formulaic mechanisms. In the majority of cases, there is little room for context, much less for negotiations. Avoiding pricing negotiations for every label change may sound attractive at first. However, post-launch price recalculation rules are clearly defined and executed accordingly; manufacturers may feel like they have little control over the outcome.

Price recalculation rules can cause big price cuts on drugs with substantial sales expansion or poor cost-effectiveness. This puts pharmaceutical companies in Japan under significant pressure, especially those with multi-year, multi-indication plans for the future. Take the oncology best-seller Opdivo, for example. In light of several changes to indications and dosing, Opdivo has undergone major price cuts since its listing in 2014, resulting in an NHI price in 2021 just one fourth of its launch price. 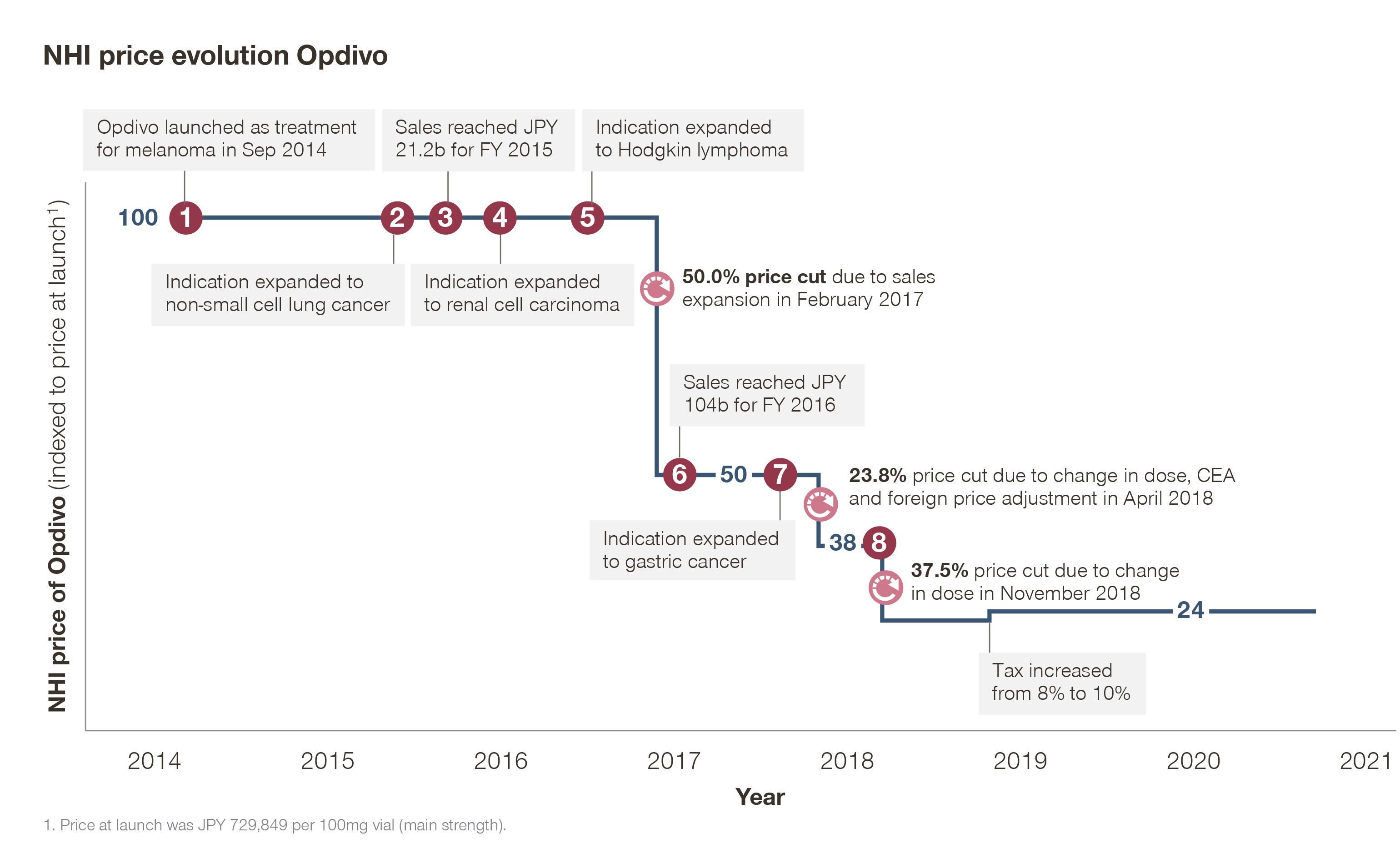 In February 2017, Opdivo faced a 50 percent price slash under “huge-seller” repricing after its expansion into three new indications. Just over a year later, in April 2018, its price was further cut by 23.8 percent  due to a change in dose, post-launch foreign price adjustment, and cost-effectiveness assessment (CEA). Later that year, in November, an additional 37.5 percent price cut was imposed due to another change in dose for lung cancer.

Adding salt to the wound, a price recalculation can also be triggered by the sales expansion of another drug in the same class. The already-battered Opdivo will face an additional 11.5 percent price cut due to the market expansion of Tecentriq, which is set to undergo a price cut of the same magnitude in August.

“But the decrease in price is offset by an increase in patient population”, some may argue. And in most cases, they would be right. However, there have been situations where, due to internal or external factors, expanding into another indication has resulted in a decrease in revenue for the drug.

Novartis’ Xolair, for example, underwent a 37.3 percent price cut under a special price recalculation rule after expanding to pollen allergy. Novartis estimated around 13,000 pollen allergy patients would be treated with Xolair. As it turns out, this number is significantly lower than the estimation: 1,000 patients in 2020 and 3,000 patients in 2021. If we make a quick, back-of-the-envelope calculation, we can see that even in the best case scenario (where 3,000 allergy patients are treated with the maximum dose of Xolair) the label expansion had a negative impact on the overall revenue of Xolair: 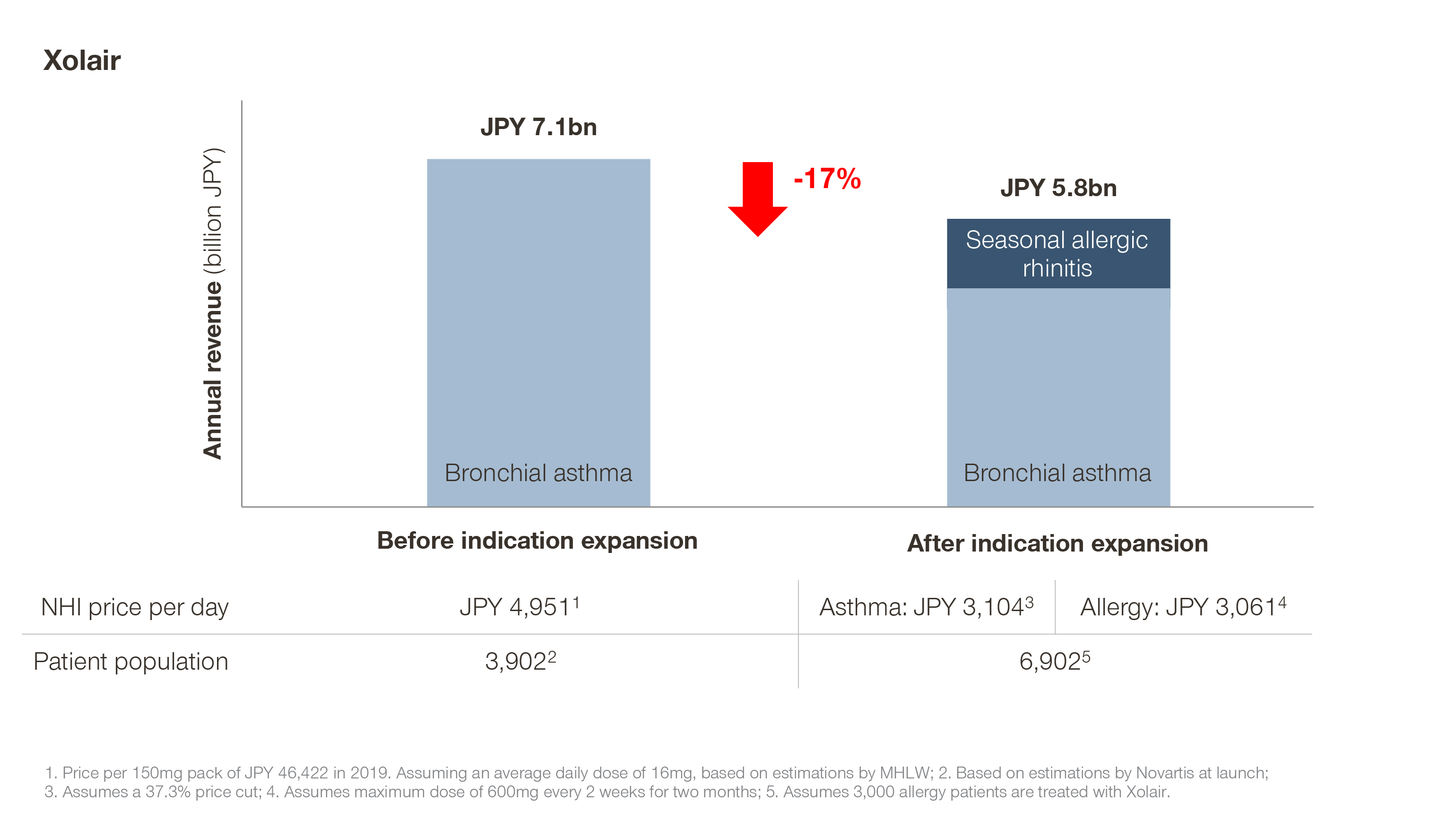 Although in some cases, like with Xolair, the resulting patient usage is out of the manufacturer’s control (what can Novartis do about lower pollen count in Japan?!), the situation can be frustrating, especially in the case of therapies bringing a huge clinical improvement.

You are your own fairy godmother

Price recalculation can feel like the villain that hunts you day-in and day-out. The good news? You can save yourself. All it takes is planning, planning, and some more planning. Early R&D and regulatory planning is crucial for NHI price maintenance, especially for drugs with multiple label extensions ahead. Even before launch, manufacturers need to have a clear picture of expected dosing changes, post-launch studies, and planned label extensions. Seeing the full picture, it is possible to assess the risk of price recalculation and define a launch strategy that minimizes price erosion post-launch.

But the work is not over after NHI listing. Launch planning optimization is an ongoing process, where manufacturers need to re-assess the risk of price recalculations more or less continuously after launch. This is especially the case for complex assets with huge potential, like Opdivo or Xolair.

This work can feel daunting, but it is certainly rewarding. The impact that early product development planning can have on price maintenance over the years cannot be overstated.

Still skeptical? See the example below. Take a hypothetical Product X, with the following regulatory timeline:

It is possible to mitigate the post-launch price evolution by adjusting the timing at which certain events (e.g., indication expansion) happen. In this case, by delaying the expansion to Indication C and the request for orphan premium, and accelerating the launch of the new dosing regimen, we can avoid a 25% price cut in 2028.

...And they lived happily ever after

The formulaic approach to price recalculations gives manufacturers a big advantage: it is possible to anticipate price cuts. At a time that may feel like going down a hill, without breaks, manufacturers can take back (some) control. The good news is that it is never too early (nor too late!) to start working to mitigate price erosion.

Of course, in practice it is not as simple as it seems on paper. There is no magic ball that will tell us the future. Rules and nuances have to be understood. Changes to these rules, which happen almost annually, need to be kept track of. It may feel overwhelming, but trust me, the effort is worth it.