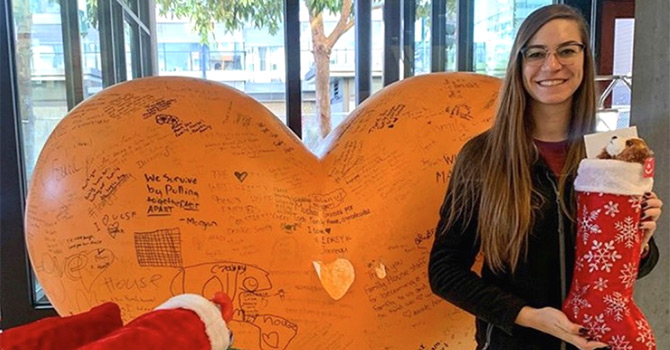 Becca Horton, Office Manager in our San Francisco and Silicon Valley locations, has strived to make a difference from day one. In addition to running daily office operations, she has been a driving force behind several fundraising efforts and has brought new awareness to a very important cause. Here is Becca’s story:

Ten years ago, while studying psychology and French at Sonoma State University, Becca Horton was approached on campus by a representative from Be The Match, a non-profit organization operated by the National Marrow Donor Program (NMDP). The representative explained they were looking for bone marrow donors, primarily aged between 18 and 44. Aged 20 at the time and in good health, Becca fit the criteria, and she readily agreed to join the bone marrow registry – a simple process involving a quick mouth swab. She then headed to the gym, not thinking much more of it for another two years.

It wasn’t until 2011 that Becca received the email to inform her that there had been a match with a 0 year old patient with cancer. At first, Becca assumed this was a typing error, as she had never heard of anyone that young with cancer. However, when she reached out to Be The Match to confirm the details, she learned more about the patient – a five month old baby with acute myeloid leukemia, a rapidly progressing type of blood cancer. Becca began researching the harsh reality of childhood cancers and learned that they are much common than she had initially expected. In the US, over 11,000 children under the age of 15 are diagnosed with cancer every year. Becca knew she had to do something to help.

“I never questioned whether I wanted to do it. If I could help save a life, then I was all in.”

In Becca’s case, donating the bone marrow was relatively straightforward. Only a small amount of bone marrow is required in infants and therefore the procedure was minimally invasive. She had to go under general anesthesia for the procedure and although slightly painful, Becca was encouraged by the fact that she was saving someone’s life. After a short recovery period of a couple of days, she was able to go for her usual five mile run. 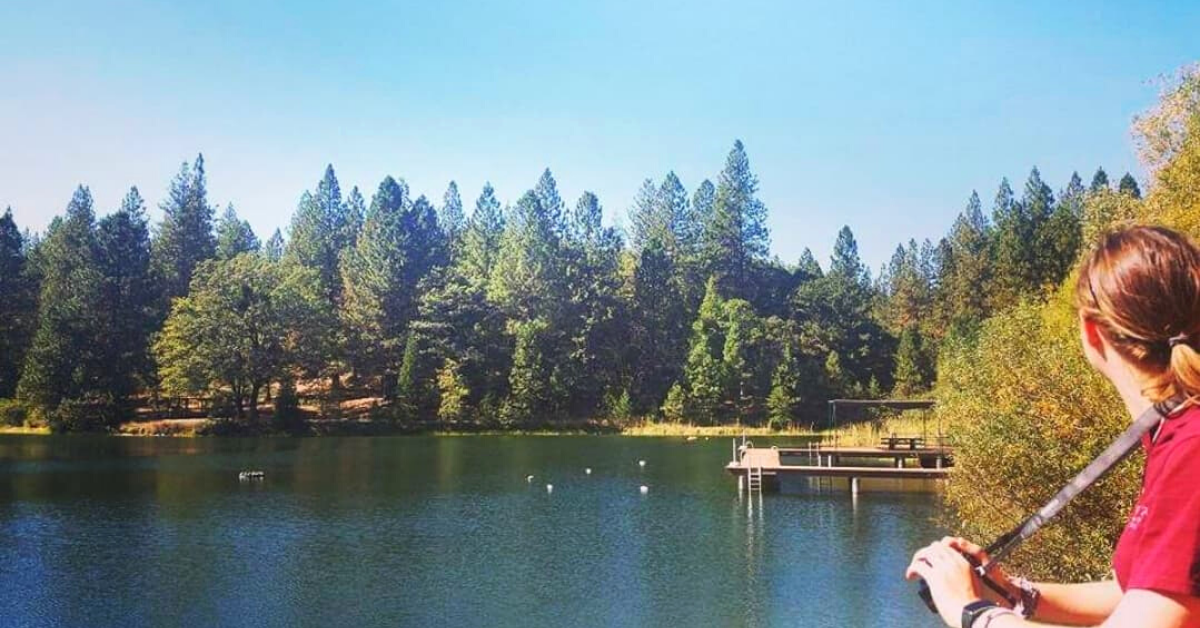 “I wanted a career that would allow me to help.”

Becca remains on the bone marrow registry but has not been matched with any other patients since. However, with all that she had learned from the experience, she did not consider this chapter of her life closed. Coincidentally, shortly after graduating Becca stumbled across a role at a small non-profit organization, Okizu, right in the town next to her college. Okizu’s mission is to help families affected by childhood cancer through peer support, respite, mentoring, and recreational programs. “To find something so relevant to my life, right on my doorstep, was somehow fate,” explains Becca. She applied immediately and began working for their main office in California. As part of her role, Becca frequently spent time at the organization’s Family Camps, SIBS Camps, and Oncology Camps – a free peer support program for child cancer patients and their families. As well as lots of fun activities, the camp provides an opportunity to meet others with similar experiences while enjoying some time as a family. “They get to talk about ports, chemo, and surgeries – things that usually children shouldn’t have to know about, but are a reality for these families. They also get to play games, make friends, and do all the things other kids do.  It was always magical to see how they would come out of their shells and bond with their peers.”

“I found a way to combine helping children with my career”

Having worked her way up from an administrative assistant to a director, Becca felt it was time for something new. Two years ago she joined Simon-Kucher as an office manager, looking for an opportunity to grow her career. However, Becca did not want to give up on a cause so close to her heart, and quickly found ways of getting the whole team involved.

“I realized that Simon-Kucher’s San Francisco office was just a stone’s throw away from Family House, a non-profit that provides temporary housing to families of seriously ill children. I reached out to my contacts there to see what we could do. I knew that Simon-Kucher planned regular community service days, and I just thought, if we are in a position to help people, why not? We should help them in any way we can.”

Over 60 Simon-Kucher employees came to set up the carnival, barbecue yummy food, play games with the kids, do arts and crafts, give away prizes, and provide the families with fun in the sun.

Without hesitation, Becca’s colleagues agreed. Thanks to her connections with Family House, the team at Simon-Kucher has already held several fundraising events to support the organization. Last summer, staff from the San Francisco and Silicon Valley offices hosted a barbecue and cooked food for the patients and relatives of Family House.  “The barbecue was an occasion for them to just leave the hospital, and not worry about cooking lunch or entertaining their kids for the day. We came up with ideas for games, arts and crafts, and prizes. I was so impressed with how everyone just ran with the event and it was great to see my co-workers as excited about something as I am,” describes Becca.  In December, the team also prepared stockings filled with gifts for children who were spending the holiday in hospital.
Unfortunately, due to the coronavirus pandemic, it has not been possible to meet Family House in person this year. Instead, the team has hosted a virtual carnival, including videos of the team performing magic tricks or playing with their pets. They also raised funds for a virtual camp for Okizu this summer, which enabled the children to participate in their usual activities of preparing crafts and making friendship bracelets.

Their most pressing issue is now raising funds for Okizu’s Family Camp. Heartbreakingly, most 550 acres of the camp site suffered significant damage during California’s wildfires in September and Okizu needs help getting back on its feet. Becca herself spent five years of her life working at the camp. “Our priority right now is to keep fundraising and help rebuild. Hopefully we can start volunteering again one day with kids in person. Until then, we are running a lot of programs online.”

“Anyone can make a difference with the right motivation”

Becca acknowledges that when walking in the door to a new company it can be hard to navigate whether there is room for growth or change. However, she remembers one of her early conversations with Partners Allison Dupuy and Josh Bloom, where she was encouraged to explore her passions and interests with their support of bringing on new initiatives. “Part of the office manager role is to ensure employees are happy, but also to introduce new things. I learned there's so much room for new ideas and flexibility here,” adds Becca, who is now a contributor and active volunteer with Simon-Kucher’s Global CSR Committee.

She hopes her story can inspire others to provide help where it is needed, but recognizes that bone marrow donation is a very personal choice. Rather, she believes there are many ways in which people can make a big difference.

“Find something you're passionate about. If you see there is something you can do, look into it. Bring it up with your project or office manager. A lot of people had never heard of Family House, but once we raised awareness, we had 80 people volunteering in one day. The hardest part is pushing yourself out of your comfort zone and taking that first step to make a change”.

Check out more People & Stories in our blog