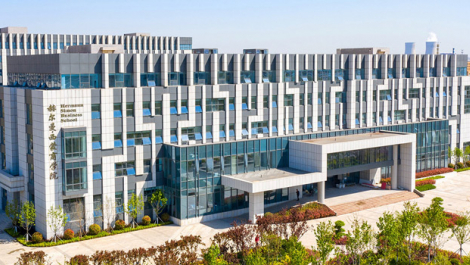 On May 11, 2021, the Hermann Simon Business School will be opened in Shouguang, China.

[Bonn/Shouguang] – Professor Hermann Simon, founder and honorary chairman of the global management consultancy Simon-Kucher & Partners, is the namesake for a newly opened international university, whose foundation was decided in 2017. The school’s program includes an international three-year study.

Simon is the only German in the global Thinkers50 Hall of Fame, renowned for his publications on mid-sized global market leaders, which he coined “Hidden Champions”.

The initiator of the new business school is the Chinese entrepreneur Yang Shuren, who consistently led his company according to the Hidden Champions principles of specialization and globalization. With this strategy, Yang Shuren's company succeeded in becoming the world market leader in several specialty chemicals.

The new business school is built around this concept. Its mission is the education of mid-sized entrepreneurs and managers, combined with a strong international orientation. The renowned Beijing strategy expert Professor Liu Hongsong will be the founding president. Meanwhile, the university is also supported by an international advisory board of leading experts and has already initiated initial collaborations with other universities in various countries.

In his virtual inaugural lecture, Hermann Simon addresses new trends in globalization: “In future, exports will be substituted by direct foreign investments. As a result, companies will increasingly invest in each other’s countries.” He describes the new business school as a bridge between China and the rest of the world, and emphasizes that all countries depend on mutually prosperous economic cooperation despite their political differences. “Staying away is not an option and the new university will certainly contribute to international understanding. It is extraordinary that a new university in China is named after a German, and I am very honoured by that.”

Simon-Kucher & Partners, strategy & marketing consultants: Simon-Kucher & Partners is a global consulting firm with more than 1,400 professionals in 41 offices worldwide focusing on TopLine Power®. Founded in 1985, the company has over 35 years of experience providing strategy and marketing consulting and is regarded as the world’s leading pricing advisor.