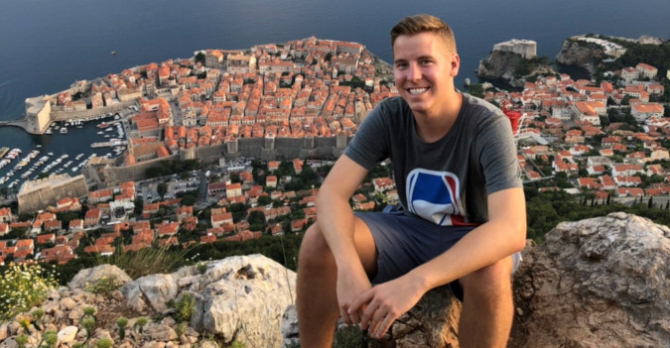 At Simon-Kucher, we are all united by the same core values. However, we all took individual roads to get here, gaining different skills along the way. When Riley Bodkins first joined Simon-Kucher’s Boston office as an intern in the summer of 2017, he discovered that the learning never really stops. Now a full-time consultant in New York City since 2018, Riley looks back on his journey to Simon-Kucher and shares some of his most memorable experiences with us.

As a student of economics, I always had consulting on my radar as a potential career. However, it was important for me to gain some real, hands-on experience before making any long-term commitments to a career choice. As I was searching through internships on my school’s portal, I came across Simon-Kucher. There were multiple jobs listed across different fields, but what instantly caught my attention was that Simon-Kucher is all about top-line growth. Cost-cutting wasn’t an area I wanted to go into, so the emphasis on revenue growth, as well as the breadth of industries and regions where Simon-Kucher operates, convinced me.

Room for everyone on board

That summer I was one of five interns selected to join the Boston office. A key message on the first day was that Simon-Kucher is a rapidly expanding company. Rather than several interns competing for one full-time spot, if you work hard and are a good fit, there are strong chances of securing a long-term position. That immediately set the tone, easing some potential tensions, and providing a collaborative working environment for everyone.  I also learned that at Simon-Kucher, the learning curve never stops. Being open to gaining new skills and soaking up information are key to becoming part of the team. New hires are encouraged to reach out and ask questions, rather than sit and potentially overthink things out fear of judgement. That's the culture here — it’s one built of very driven team members, with everyone happy to help each other.

As an intern at Simon-Kucher, I was definitely a valued member of my project team. My tasks were meaningful and had a real impact. I even had the opportunity as an intern to fly across the country to visit a client on site, which certainly gave me real insight into what it means to be a consultant in the office, as well as at a client. Plus, alongside my work on an automotive a particularly valuable part of the internship program was participating in the “intern project”. It was the summer that Amazon acquired Whole Foods, so our team decided to run a study on omni-channel retailing, specifically focused on the grocery and clothing industries. Our insights and findings were cited by an article in Forbes, which was a very memorable way to wrap up the internship.

At the end of the summer, I was thrilled to get an offer for a permanent consultant position. However, after spending four years in the Boston area, I was ready to start a new chapter of my life in New York City. This was certainly a big change for me that came with a lot of personal growth, and Simon-Kucher was super accommodating in facilitating the office change. I still miss the Boston office at times, especially the fun colleagues and friends I made there, but I am enjoying my time in New York and have made new connections here. With the collaborative nature of projects staffed across different offices it isn’t really possible to lose touch with colleagues, and we of course all look forward to getting together at Simon-Kucher’s annual world meeting.

Among many things, what keeps me at Simon-Kucher is the variety. We cover such a wide range of verticals early on and you are never pressured into working mostly in one industry or space. Clients can range from a door-and-lock manufacturer to a fast-casual restaurant. That was what I was looking for coming out of school and an aspect I continue to strongly value today. I am still at a point in my career where I don't know exactly which vertical or industry I'm most passionate about or want to specialize in, but Simon-Kucher is a place where I can explore different options and gain a wealth of experience before making that decision.