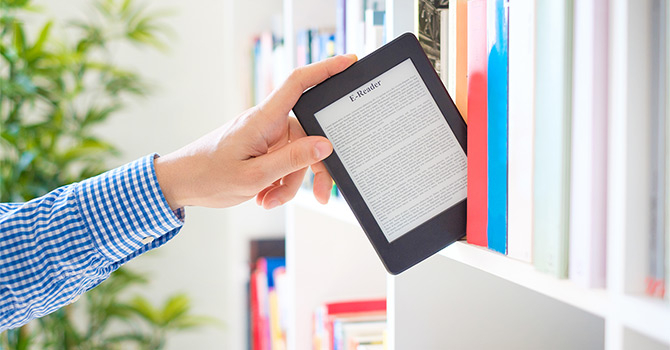 For a while now, e-books have stepped out of their niche. Even though they’re still not meeting the sales numbers of print books, during the last ten years, a significant increase of e-book content, suppliers, and readers have shaped the publishing industry. To take a closer look at this development, we compared two international studies about consumers’ reading behavior, conducted in 2011 and end 2020.

As in every other industry, digitalization is a driving force in the publishing industry. E-books especially are a content format that is increasingly attractive to readers. And therefore has the potential to at least partially compensate publishers and suppliers for print books’ drop in sales. If we look at the time frame between 2010 and 2020, we find that revenues for e-books are constantly on the rise: In the US, the compound annual growth rate (CAGR) for e-books has been 13.3 percent, while in the UK and Germany it was as high as 18.9 percent and an incredible 45.3 percent, respectively. How does this sharp increase come about? In the following, we are taking a closer look into this development.

E-book use among readers has risen sharply

The main insight from comparing the two Simon-Kucher studies about consumers’ reading behavior from 2011 and 2020 is that the share of e-book users among readers overall has increased significantly. In Germany, the number almost quadrupled (2011: 15 percent; 2020: 56 percent), but with the addition that the initial figures here were significantly lower than in the other countries. In the US and UK the share has been going up as well; in the US almost three out of four readers now prefer the e-book format (75 percent in 2020 vs. 48 percent in 2011). E-book readers in the UK now account for 60 percent of all readers instead of 45 percent in 2011. 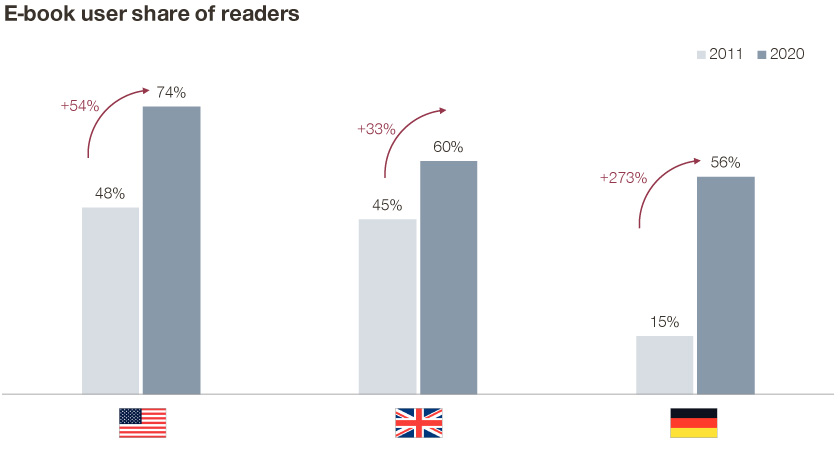 Will this upwards trend persevere? That is hard to tell, however, looking at predictions from 2011 gives us confidence. Asked about their planned future use of e-books, 54 percent of German participants stated in 2011 that they already wanted to use e-books or would do so in the future. This matches the current figure of 56 percent very closely. In the US and in UK, the expectations in 2011 were somewhat higher than the reality today (US: 86 percent expectation, 74 percent reality; UK: 79 percent expectation, 60 percent reality). Still, the upward trend is noticeable. Therefore, we take today’s prediction of future e-book use with optimism and a grain of salt: Today, 62 percent (Germany), 78 percent (US), and 70 percent (UK) of current e-book readers plan to read at least one e-book during the next 12 months.

However, the numbers suggest that this increase stems from a redistribution among different reader groups. For the number of readers refusing to even consider e-books has been very stable, at least in the US and UK. Then like now 21 percent of readers in the UK said they would not use e-books in the future; in the US, they accounted to 14 percent in 2011 and 17 percent in 2020. In Germany, on the other hand, there is hope to convince at least some of them: 46 percent of readers rejected the e-book format in 2011. But today, this number is “only” 24 percent. Whether this is due to ever better usability or the progressive adoption of a wide variety of devices on which e-books are now available (e-book readers, smartphones, tablets, etc.), we can’t say for sure. But this means that every fifth reader in Germany has not yet definitely formed their opinion on e-books. This potential needs to be leveraged!

Most readers use multiple reading formats

Most readers today use at least two content formats (print and e-books or print and audiobooks), a large number even three (audio, print, and e-books). The amount of print-only readers has decreased significantly.

It is interesting to see that the amount of readers preferring print as well as e-books in all three countries has settled at a fairly low level. In Germany, ten years ago the number for this group was also at this level, but numbers in the UK and US deceased significantly to reach this low. This suggests that even though many readers now use all three formats, there are also some who now solely prefer e-books. The fact that print and e-books are more frequently perceived as substitutes is also shown by the sharp drop in interest in combined print and e-book offerings.

What’s especially interesting for the publishing industry is not only if people want to buy e-books, but also where they prefer to purchase them. We found out that most e-book users in 2011 bought e-books from Amazon; today, they are still leading the field despite losing some shares. Apple on the contrary has lost its pioneering role: while in 2011 a large number of readers purchased e-books from the Apple e-book store, today only few do so. Usage of other online stores has remained roughly the same, online stores of booksellers were able to increase slightly in Germany but lost shares in the US and UK. Online stores of publishers gained some, but at a low level.

Willingness to pay premiums higher than ever 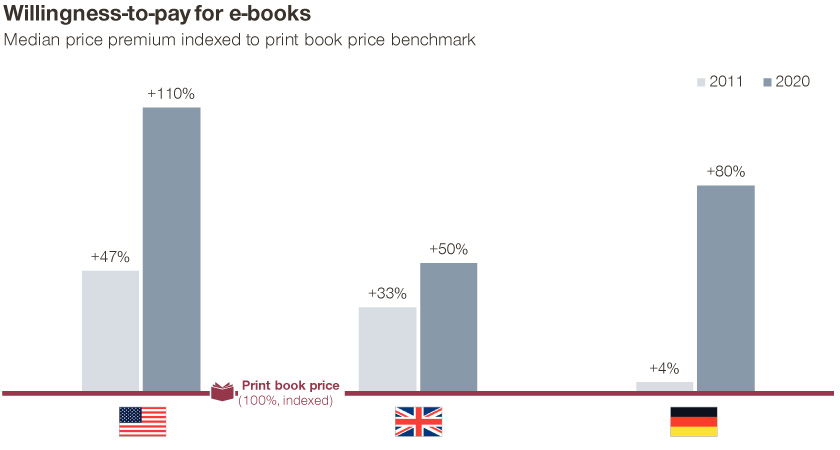 These figures show that there are real opportunities for the industry to skim off this higher willingness to pay. It is all the more surprising that publishers do not tap into this potential: On the contrary, over the last ten years, they lowered prices for e-books considerably in Germany. 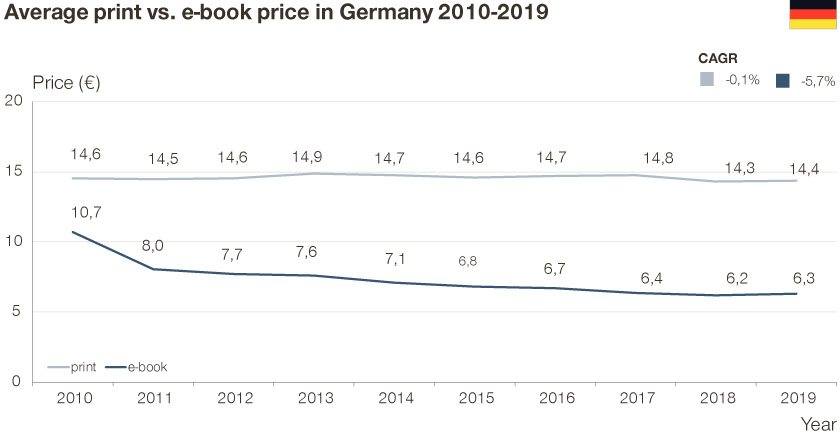 The trend towards lower prices for e-books in the past years might be reversed in the future: In March 2021, the German industry association for booksellers (Börsenverein des Deutschen Buchhandels) published the latest numbers on e-book usage in 2020. According to their research, the average price level for e-books increased by 4.9 percent to 6.63 Euros in 2020. Additionally, the number of purchased e-books increased significantly by 7.2 percent to an average of 9.6 e-books sold per person. These developments led the overall spending for e-books to rise by 12.5 percent to roughly 63 Euros per year and person in 2020.

We’re excited to see how the pricing of e-books will develop in the near future. A differentiated price strategy is in our opinion the way to leverage the higher willingness to pay for e-books. Setting higher prices for book titles high in demand to skim off customers’ willingness to pay and lower prices for longtail e-books or remittees to push their sales figures is a strategy that promises publishers flexibility as well as higher profits.

Conclusion: The potential of e-books has not yet been fully leveraged

Looking at the last-named numbers alone, it seems clear that the publishing industry has not yet taken the full advantage e-books and their readers have to offer. Looking at the complete set of studies, this only becomes more noticeable. The industry has to use the fact that e-books have changed from a novelty to a reading format of equal value to print books and act accordingly.