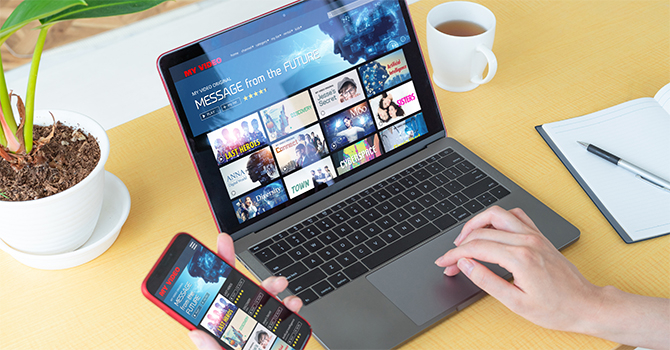 Our 2022 Streaming Study reveals: Even though most users are streaming more than pre-pandemic, subscription fatigue is starting to show. In fact, more than one third of users are likely to cancel a subscription in the next year. Experts outline why streaming services need to rethink their monetization models.

COVID-19 undeniably sparked a boom for video streaming services. Pandemic restrictions drove millions of people to sign up for providers like streaming giant Netflix, resulting in record numbers for the company. Recently, however, the trend has reversed. Having lost more than 1,000,000 subscribers in the first two quarters of 2022, Netflix is looking at a dramatic slowdown leading to shares tumbling more than 65 percent over the past twelve months.

Our latest Global Streaming Study, surveying more than 10,000 respondents worldwide, underlines the rising trend of subscription fatigue. Even though subscribers are watching more content than before, 35 percent are likely to unsubscribe from a service in the next 12 months.

How do you explain this? Are users simply getting bored of movies? The good news for Netflix, Disney+, and co. is that the answer is “No!” In fact, our survey found that there are new monetization options out there for streaming services to try. In part 1 of our blog series, we highlight key findings and outline how streaming providers can keep viewers engaged and satisfied.

In April and May 2022, Simon-Kucher’s Global Streaming Study surveyed more than 12,500 respondents from 12 different countries, asking about streaming behavior, content preferences and willingness to pay.

Behavioral insights: Users are streaming more than pre-COVID and use paid subscriptions to do so

Our study shows that while streaming has replaced ‘traditional’ TV as the go-to way to watch content, traditional TV is still being watched. This varies by age group, with the younger generation preferring streaming much more strongly than older users. 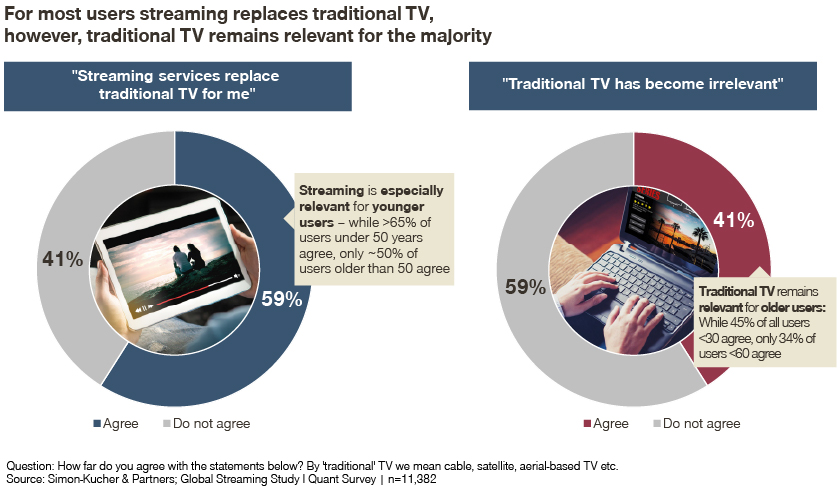 Overall, however, users are streaming more than they did before the pandemic. Time spent watching streaming content has grown the most in Brazil, India, Singapore, and the US while western continental Europe has shown the lowest growth levels. 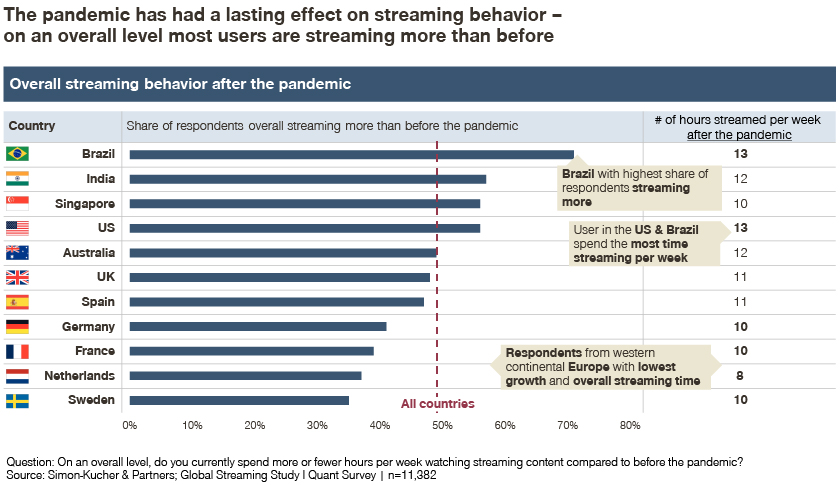 Although all content types have increased in popularity, most streaming time is spent watching films. Almost half of respondents (47 percent) now spend more time streaming films than they did pre-pandemic. Along with TV shows, films are streamed for more than two hours per week, while live events are less popular with not more than two hours watch time per week. More differences can be observed for the second and third most watched categories: Documentaries are more popular in Germany, the Netherlands, and Brazil, whereas comedy TV shows score higher in the US, China, Australia, and Singapore. 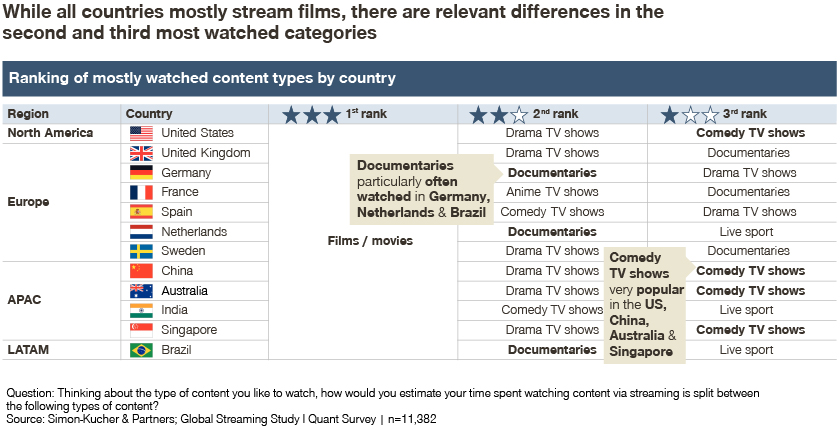 The most popular device used to stream these content types is television, while tablets are the least preferred. Smartphones are typically the second most used device, indicating a high demand to watch content “on-the-go”.

Customers are willing to pay to consume their preferred content. Together with free online services, paid subscriptions are the most popular options to access streaming, especially when it comes to watching films and TV shows. 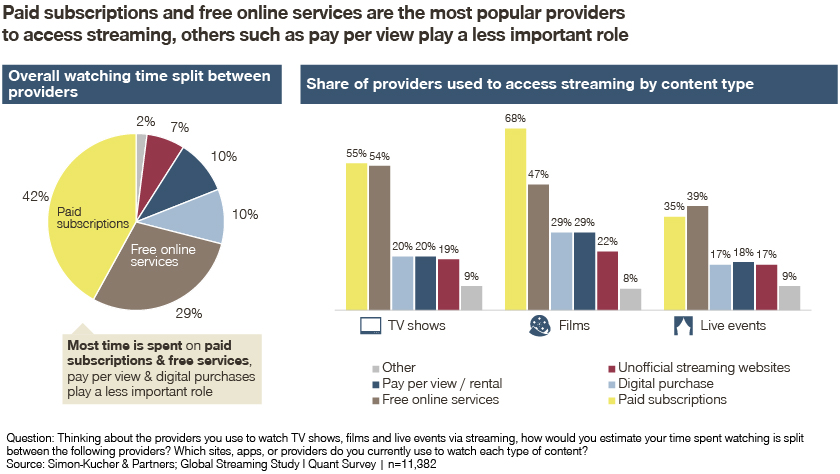 Subscription fatigue: Advertisement is not a reason to unsubscribe

High relevance, extended use, and, on top of that, customer willingness to pay – this might sound like a stable win for streaming providers. However, further study results reveal that streaming subscriptions are price-sensitive products, and this is reflected in customer behavior.

Even though most respondents are comfortable with the streaming subscriptions they own (77 percent), almost a third of users aren’t. In fact, 35 percent of users are likely to cancel a subscription within the next 12 months, especially in large streaming markets like China, India, and the US. More than a quarter of customers have already cancelled at least one subscription in the last year. 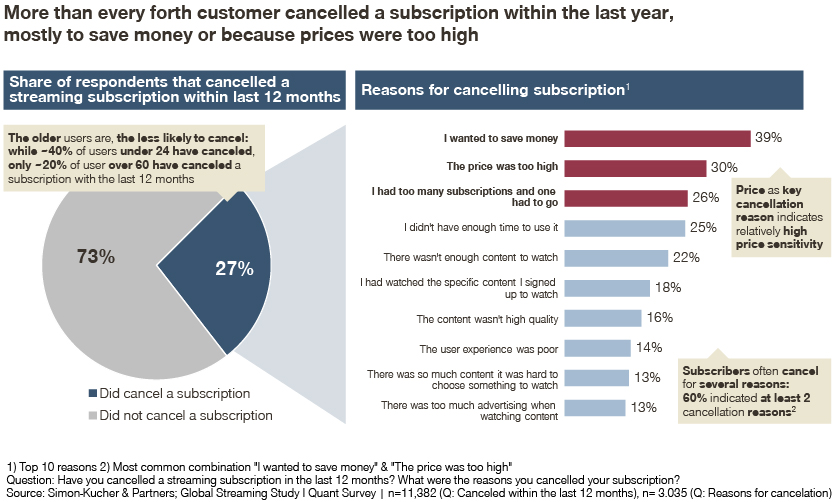 Price turns out to be the most common reason for cancelling a subscription. Most of the respondents cancelled to save money (39 percent) or because the subscription’s price was too high (30 percent). However, with the right offer, the majority can be persuaded otherwise: 53 percent would reconsider if their subscription fee was lower, even if that means advertising is shown.

Netflix subscribers display a particular high acceptance for a combination of subscription fees and advertisement. 85 percent of Netflix customers wouldn’t cancel their Netflix subscription if ads were shown. However, 14 percent would expect no price increases and 30 percent a lower price in return for accepting ads. Subscribers in the US, India, and China are the most open to advertisement monetization models, with three in five respondents likely to stay if they were introduced.

This openness to paying subscription fees in return for accepting ads indicates potential for hybrid models and opens the door for a new era of streaming. 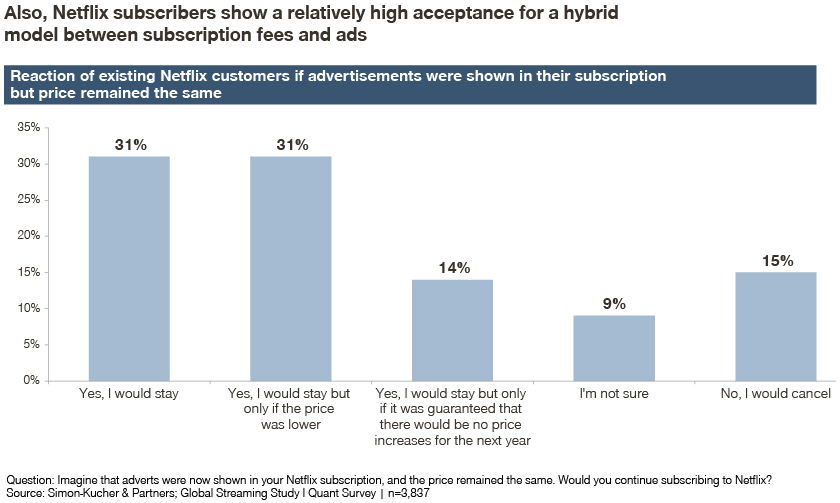 New monetization models can be a way for streaming providers to retain customers. The results of our latest Global Streaming Study reveal what a future monetization model might look like. The key finding: Advertising is not necessarily a reason for users to unsubscribe, but high prices are. Although some customers cancel their subscriptions because of content overload and a lack of time, the majority of them are confronted with excessive costs due to multiple subscriptions running in parallel.

It's clear that a stable or cheaper monthly subscription fee including advertising would be an attractive option for different customer segments. But there are also completely different hybrid models, known from music streaming services such as Spotify, that businesses should consider. In addition, differences in the most popular categories, indicating different user segments between countries, provide another avenue to customize regional streaming portfolios and improve user experience and retention.

Want to know more about ways to improve your monetization potential? Reach out to our streaming service experts and find out how you can get your transformation started.

Interested in how important various criteria are when deciding to purchase a streaming subscription and what price consumers are willing to pay for a specific streaming service? Stay tuned for the next episode on subscription criteria and pricing in our Global Streaming Study series.