The Inflation Reduction Act, which has just come into law, includes the Medicare Drug Price Negotiation program which will impact healthcare in the US. Experts Nathan Swilling, Nikhil Pinto, and Alexa DeAngelis outline what this program is and its impact on current drugs.

Many of these provisions are expected to have far-reaching implications on both current and future pharmaceutical products. Yet, the eligibility criteria outlined under the Medicare prescription drug price negotiation provision offers some interesting insights into the currently available products that might fall within the scope of the program.

Medicare Drug Price Negotiation: What and how?

Part B drugs are physician administered, while Part D are generally oral/self-injectable drugs. In order to be subject to Medicare negotiation these drugs must meet the following criteria. They must:

They won’t be eligible if they:

The negotiations begin approximately two years prior to the date the MFPs take effect. They’ll consider factors such as the drug’s cost of production, R&D expenditure, and the competitive landscape. For these negotiations, the MFP ceiling for the drug is determined as the lesser of the product price paid under Part B or D (historic spend), or a percentage of the non-federal average manufacture price (AMP).

Impact of the program on current drugs

Based on the criteria outlined and some key assumptions, a high-level analysis offers a few major takeaways on the products eligible / impacted by negotiation:

The first is that several Part D products with the highest Medicare spend face impending loss of exclusivity. This includes Revlimid, Xarelto, Humira, and Pomalyst, which renders them ineligible for the first negotiation in 2026 (assuming a generic / biosimilar launches immediately after loss of exclusivity).

Similarly, a few other Part D products with the highest Medicare spend don’t meet the “duration since FDA approval” criteria. Among these are Trulicity, Biktarvy, Breo / Trelegy Ellipta, and Ozempic, also disqualifying them from the negotiation process.

However, several of these products may also face other challenges, such as an upcoming loss of exclusivity (e.g., Eliquis in 2026 and Ibrance in 2027), a competitive environment (e.g., Jardiance / Januvia in type 2 diabetes), or patent litigation (e.g., Myrbetriq), which could impact their eventual eligibility (depending on how the HHS Secretary interprets the criteria).

Several Part B products with the highest Medicare spend may also face impending loss of exclusivity. Examples of products affected include Eylea, Prolia, Soliris, Entyvio, Cimzia, Simponi Aria, and Abraxane. All these are rendered ineligible for the first Part B-focused negotiation in 2028 (assuming a generic / biosimilar launches immediately after loss of exclusivity).

Alternatively, some products that currently face generic / biosimilar competition (and therefore don’t meet the criteria for negotiation) still contribute to a large proportion of Medicare Part B spend. These include Rituxan, Lucentis, Neulasta, Avastin, and Remicade.

A few other Part B products with the highest Medicare spend also don’t meet the “duration since FDA approval” criteria – including Darzalex, Tecentriq, Ocrevus, and Imfinzi, rendering them ineligible. While Privigen and Octagam would otherwise meet these criteria, they are ineligible for negotiations as they are derived from plasma.

Based on these criteria, of the top 50 Part B drugs in total Medicare spend, only four would qualify -- Keytruda, Opdivo, NPlate, and Tyvaso. The latter of which each account for around $200 million in Medicare spend (relative to around $3.5 billion for Keytruda). 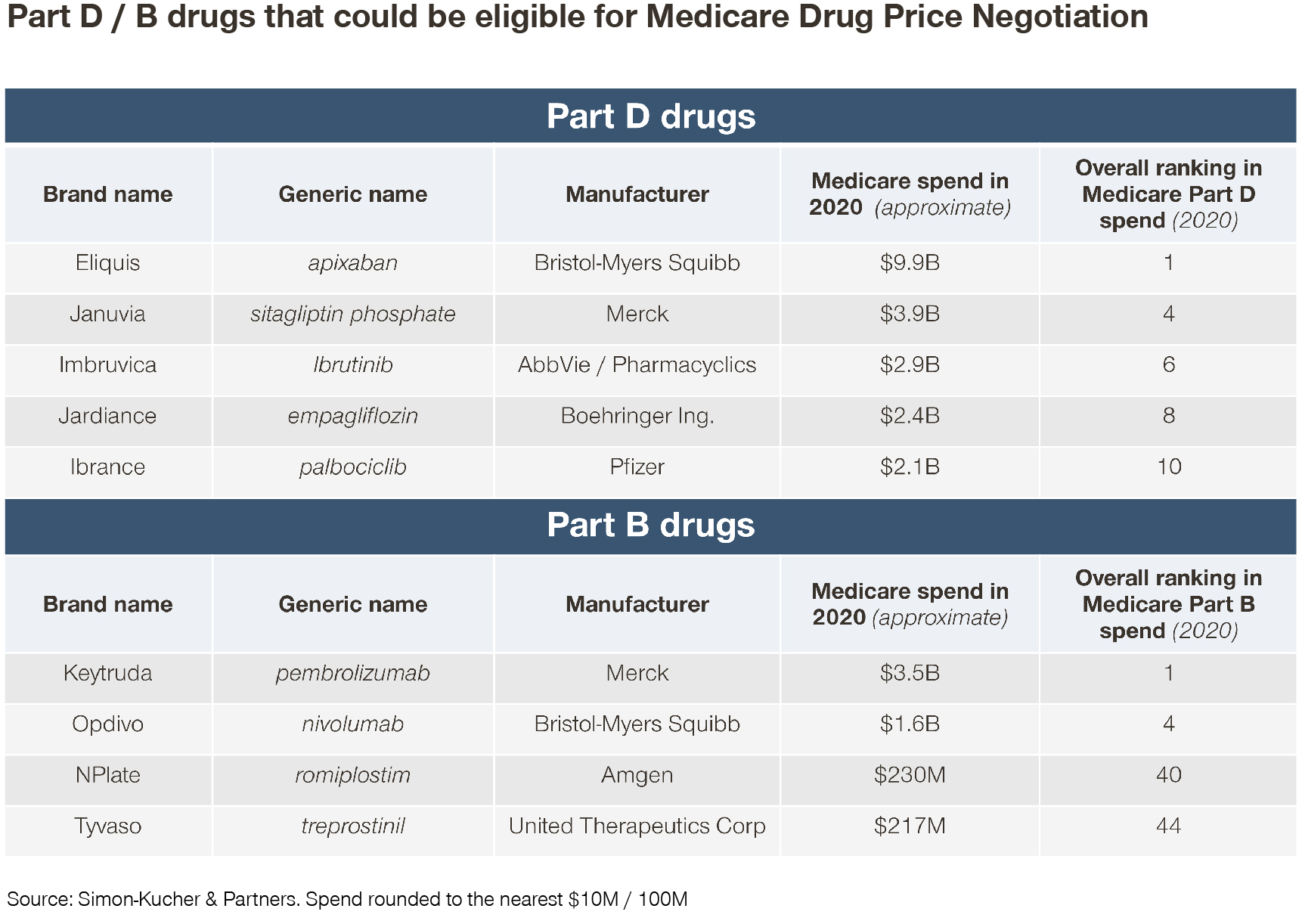 Several drugs in the top 10 in terms of Medicare Part D spend (e.g., Eliquis, Januvia, Imbruvica, Jardiance, and Ibrance, ranging from around $9 billion to around $2 billion in Medicare spend) could see an impact on their revenue in 2026 onwards. However, possible indication and patent extensions, as well as generic / biosimilar availability and agreements could alter eligibility for these and other products.

On the other hand, only a handful of Part B products in the top 50 in terms of Medicare spend seem to make the cut for 2028 (e.g., Keytruda, Opdivo, NPlate, and Tyvaso, ranging from around $3.5 billion to around $200 million in Medicare spend). This indicates that the impact on spend may be somewhat limited for Medicare Part B relative to Medicare Part D.

In addition, the interpretation of “limited market competition” by the HHS secretary could further affect product eligibility. Regarding the negotiations themselves, the extent of cost data that manufacturers can share (i.e., actual R&D expenditures) as well as the possible transparency considerations could impact the negotiation process and outcome. We’ve already seen an example of this for the Cost Calculation Method of price benchmarking used by the NHI in Japan.

Not to mention that it remains to be seen whether there’ll be a true negotiation or if the Centers for Medicare & Medicaid Services (CMS) will simply default to the MFP based on the minimum discount off the AMP.

For more information on how the Inflation Reduction Act will impact healthcare in the US, feel free to contact our experts!