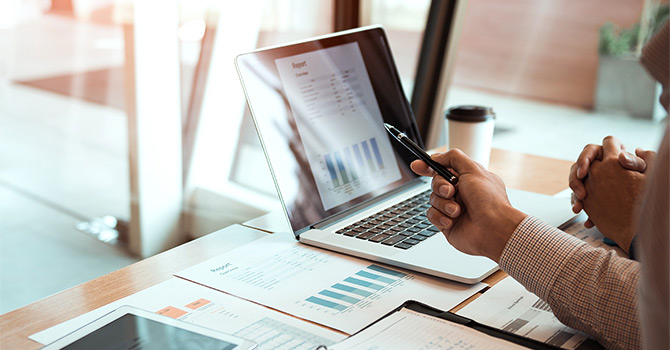 Until recently, negative interest rates were taboo in Germany, but now, passing them on to corporate and private customers is what’s driving the banking industry. What options does the industry have for monetizing bank deposits without upsetting its customers? We present proven approaches from the German market.

Regional banks, universal banks, and direct banks in Germany are all feeling the pressure from the European Central Bank’s (ECB) ongoing negative interest rate policy. Since 2014, the ECB has been charging a custodial fee to discourage banks from “parking” cash, and since September 2019, its interest rate has been minus 0.50 percent. The ECB’s graduated interest rates and tiering system help ease the impact on banks but aren’t a solution to the problem.

How to pass on negative interest rates to customers

The solution is quite simple: Banks need to forgo the zero bound and pass on negative interest rates on deposits to their customers. However, the media, politicians, and the counterintuitive nature of negative interest rates, which can even be difficult for experienced bankers to understand, actually make matters worse. After decades of fluctuating but always positive interest rates for deposits, the idea of paying for a credit balance can be unsettling at first. In fact, the first institutions in the German market to introduce negative interest rates caused a major uproar. A lot has changed since then, and media coverage on the topic now tends to focus on the rising number of institutions that have introduced this price point, which is currently between 200 and 300 institutions, according to current media reports.

Not playing is losing

From a game theory point of view, banks are caught in a dilemma. The banks that took initiative early were unfairly and critically represented in the media. However, the last institutions to introduce negative interest rates will likely see such a high rate of cash inflows that they won’t be able to accommodate them in their lending operations despite loan growth. The first and last banks to charge negative interest are the losers in this regard.

In order to not be the last to take measures and thus be able to prevent or regulate cash inflow, many institutions are already defining negative interest rates with their new customers (often at a 0.00-percent interest rate). Banks can lower the interest rate, however, without further customer consent to, for example, minus 0.50 percent. This option is absolutely essential and, fortunately, comparatively simple. However, discouraging new customers from depositing their money only partially solves the problem. Banks need a sustainable solution for their existing customer base. That is the key. Before taking action, banks should analyze the conceivable outcomes of the “negative interest game” in detail. How will customers react if banks introduce custodial fees for deposits for existing customers? What would this mean for the banks?

The customer distributes their deposits between several banks: a clear 3–1 defeat

Customers’ obvious reaction to negative interest rates is to divide their deposits across two or more institutions. However, this doesn’t benefit the customer or the bank:

The customer reluctantly pays the negative interest: the 1–1 draw

Many customers will ultimately accept the new fees, but this isn’t ideal:

The customer transfers their deposits into the securities business: a 2–0 victory with a catch

The optimal approach is to refine the securities business. This clearly benefits the customer. For example, while having enough liquid cash to cover an unexpected car repair makes sense, many customers are more likely to have enough reserves to buy several new cars, which is neither normally necessary nor in the customer’s best interest. From the bank’s perspective, this is also a good thing:

Banks can encourage their customers to transfer their funds into the securities business using attractive voucher concepts. For example, banks can count customers’ paid custodial fees toward transaction costs once they’ve purchased securities. This puts the ball in the customer’s court and makes it much easier to talk to customers about custodial fees. It even increases customer acceptance.

The catch with the securities business being a solution is that the combination of the dot-com bubble as well as financial and euro crises has decreased savers’ already low affinity for securities to such an extent that the topic is a categorical red flag for many customers. From our experience, sometimes even top salespeople with strong arguments can’t convince savers to purchase securities.

The customer avoids paying the fee via better coverage: a 1–0 win

Banks can derive an attractive solution by carefully listening to many of their customers’ main criticism: “I’m a good customer. I do all of my business with you, so why can’t I get a higher exemption threshold?” This mindset is also often shared by banks’ sales teams. The customer statement provides the answer: Banks need to differentiate between customers they have an extensive relationship with and those they only do business with in specific areas. In the following section, we present two proven approaches to price differentiation for custodial fees.

Customers who regularly do business with the bank and use it as their main bank will only be charged negative interest on larger amounts. Both customers and bank sales teams understand this logic. In addition to being fair for particularly loyal home-bank customers, this rationale also provides an incentive for customers who are less active to improve their relationship with their home bank in order to obtain a higher exemption threshold for bank deposits. This not only allows them to close any gaps in coverage but also helps them avoid or reduce the impact of negative interest rates.

But how can the customer relationship with the home bank be measured? Banks need to develop a home-bank loyalty program with three to four status levels (e.g. bronze, silver, gold) that customers can achieve depending on how many products they use and how much money they invest. The program should include a range of exemption thresholds (e.g. from 50,000 to 250,000 euros) related to status level instead of the same amount for all customers. The higher the home-bank status, the higher the exemption threshold. The loyalty program is significantly fairer, sets the right incentives, and increases acceptance among customers, banks’ sales teams, and the general public. This is also why this approach is so successful.

If banks want to differentiate their interest rates for deposits (e.g. +0.10 to -0.50 percent), they must relate the amount of deposits held by the customer to the other business volume. The reference figure is therefore the remaining “good” business volume, i.e., the sum of loans, portfolio holdings, and surrender values of insurance policies and other attractive components of the business relationship. If a customer only has deposits with the bank, the costs incurred should be passed on in full. However, if a customer has additional business volumes, the bank can lower interest rates in the custodial fee, since the customer relationship as a whole is strongly positive.

Banks can also refer to total assets. For example, if a customer has a securities account of two million euros, granting a liquid financial buffer of 150,000 euros would be appropriate and, in the context of the income from the securities business, also acceptable from a bank’s perspective. Customers who only have a money market account with a 150,000-euro balance, however, can be fully charged by banks with a clear conscience.

Nevertheless, many banks are currently following approaches that aren’t differentiated or well thought-out, leading to major problems with customer satisfaction and acceptance. In contrast, the differentiated approaches outlined above are a win-win for both the customer and the bank. Customers benefit from good coverage and loyalty to their home bank, while banks generate income from the custodial fee or from cross-selling and the securities business. It’s important for banks to have a well-developed strategy instead of letting their advisors grant special conditions at their own discretion, especially since exemption threshold limits continue to decrease, affecting a growing number of customers.