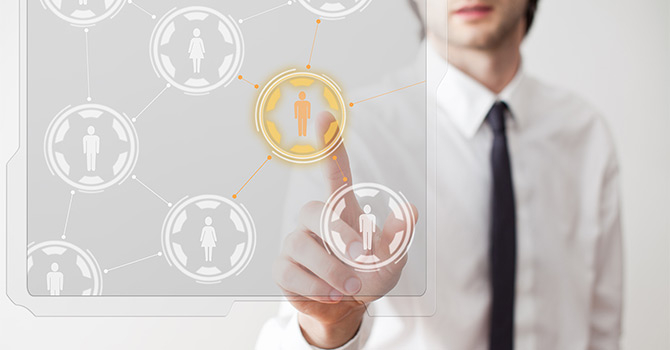 Peter Colman continues his series on behavioural economics in sales management. Getting the right size and structure for the sales organisation is crucial for growing the top line. How can we make sure those decisions are made objectively and avoid biases that could squeeze the bottom line?

If the sales strategy is about deciding how to capture the market potential, then the sales structure should enable that by deploying commercial teams to keep close proximity to customers without exploding the “S” in SG&A (selling, general and administrative expenses). In other words, designing the commercial operating model (the structure, processes and infrastructure) is about managing trade-offs. Trade-offs require decisions – and decisions, if not taken carefully, are prone to the same sort of behavioural biases that I’ve covered in previous articles.

Doing this well is not just a case of moving boxes on an organisational chart. Sales leaders who have been through this type of change should appreciate this quote from Yogi Berra: “In theory, there is no difference between theory and practice. In practice,there is!” Once you consider existing customer relationships, differing capabilities across countries, career trajectory of future leaders and internal politics it becomes a more complicated task. Neither is it static; markets mature and firms grow, diversify and often go through mergers and acquisitions. Accordingly, the operating model and sales structure will need to be adapted over time.

As a top line focused consultancy, Simon-Kucher conducts thousands of commercial excellence programmes every year. In previous articles I’ve covered a range of topics from incentives, sales strategy and tooling. This time, I’ll focus on how sales leaders can ensure their sales structure and processes are fit for purpose and avoid common pitfalls in both the design phase and the migration phase to the new target operating model.

Who’s going to disagree with being more customer-centric? No-one. Framed like this, we all know on the surface it sounds like a good idea. How this is actually done though, is crucial to its success.

In one example where this had gone badly, the company in question had recently transitioned from a product-led organisational structure to what it hoped was a more customer-focused one, organised by industry sectors. The idea was that this would allow better service and more cross-selling across product categories. Closer review of the target customers in each sector though, showed that there were only a few areas of overlap where this was likely to happen (at least to any sort of financially material level). The new operating structure, however, moved from a relatively straightforward hierarchy to a very matrixed one. This reduced management accountability and required the sales teams to be educated on a vastly increased set of both product categories (too many to be remembered) and customer segments (that they were unfamiliar with).

Looking back, they’d created a huge amount of complexity and inefficiency without increasing either the level of service or revenue uplift. The irony was that their previous “product-led” structure was actually quite customer-focused because most customer segments tended to buy within a specific product category. Had they re-framed the question to be “how can we become more customer-focused, while also maintaining our efficiency?” they would have taken a different approach. By looking more closely at the customer segmentation, their purchasing history, and a range of potential structure designs, a better conclusion was that their current structure was fine, but there was room for improvement within certain customer facing processes. Fixing those would have improved the buying experience for higher priority segments.

One of the most complex transitions an executive team has to steer through is a merger or acquisition, where our tendency to dislike losses can be a very useful bias, at least for protecting margins.

Post-merger integration work to combine two organisations into one is highly complex. Generally, the consolidation of back-office functions is a relatively straightforward task, albeit one that still needs to move through various stages. It is usually the front-office (customer-facing) that is the much more complicated animal. What do we find there? Divergent go-to-market approaches, overlapping product and customer portfolios, differing salesforce territories and compensation schemes, along with conflicting price positioning, all contribute to the complexity of creating a consolidated commercial operating model.

Driven by combined top management desire for “cultural integration”, in our experience there is usually an eagerness to move to a new structure as soon as possible and then work out the details after that. We caution against that, particularly if there is a big margin gap between the two merging organisations. We often see the margins of the premium player being eroded by this consolidation (usually it is due to premium products sold too cheaply by some salespeople unfamiliar with them). From a profit perspective they would have been better kept apart, at least in the short term, to continue serving their distinct customer segments, with the exceptions, where there were overlaps, being dealt with on a case by case basis.

The usual reaction when faced with the need to grow the salesforce is to add account managers to outside sales. It’s quite natural when you consider that sales directors have usually been promoted from this group and therefore this type of sales role is held in high regard by management.

In many cases though, a less glamourous but a more cost-effective way to increase market coverage is to add an in-house salesforce into the mix. Yes, their hit rate and average order value might be lower, but with a good smile-and-dial set up they can be very efficient as they don’t have the huge time sink of “drive-time”.

Despite the numerous LinkedIn blogs declaring “outbound is dead”, we know many clients who are successfully deploying these teams. When used with a good hunt list and a stripped-down product set this can be a great set up for targeting small to medium-sized customers.

#4 “HOW MUCH TIME DO YOU SPEND WITH CUSTOMERS?” (ANCHORING)

How much customer-facing time do your outside sales team achieve? We usually spot that the actual selling time can often be quite severely limited and this often comes as a surprise to the sales leaders. Burnt by previous issues that have let down their customers, we often find the rep “managing the orders” through the system when they should be “managing the sales”. The creation of a sales operations team can be a good way to free up some of your sales resource.

Of course, there are all the other usual time sinks too, such as admin, team meetings, travel time and the like. So, how does the customer-facing time differ between your best and the rest? As a general rule, the best reps would typically be at the top end of the range. Using the bias of anchoring, we can take the stats from the best reps and use that as a target for the rest.

Is all revenue created equal? Your CFO might come from that school of thinking but we know that selling into existing customers is usually both easier and more efficient than landing deals with brand new logos. If you expect the same sales reps to cover both existing and new clients, then you may be suffering a bit of optimism bias.

We would expect the focus on “new-new” deals (new customer – new opportunity) to be significantly lower as street smart reps prioritise their efforts where they have had past success. It would be worth seeing if the proportion of new-new revenue is increasing, decreasing or static. If you do this, it will also be useful to cut the data to exclude pure inbound windfalls as this will muddy the waters.

See what the data tells you. In our experience, a fairly common result of such an analysis is recognition of the need to introduce a new logo pursuit team into the sales structure.

While it is the exception rather than the rule, the more data-driven sales leaders give guidance to their account managers not only on whom to visit but also on how often to visit them.

In other words, rather than leaving these decisions to chance, these sales leaders have created a process based on their customer segmentation to ensure that the customers with the biggest spend and potential are systematically getting the most attention and highest intensity of support.

Outside sales can be a bit of a lone wolf pursuit so each account manager has far less visibility on what their colleagues do compared with, say, the “numbers they post”. With so many decisions for the account managers to make about where they invest their time, it can be helpful to have some guidance. The sales leaders also know if they make it too prescriptive it will be demotivating and is likely to become a box-ticking exercise.

IN SUMMARY, DEPEND ON DATA

Is there a perfect sales structure and operating model? I don’t believe so. I’ve seen numerous examples where what’s worked for one firm hasn’t for others, even in the same industry sector. One thing we do know though is that designing the right model for a company is a really big “brain on” activity. The best way to avoid over-simplistic platitudes, lazy heuristics and unintended consequences is to get the data needed to allow decisions to be made based on facts and, where possible, to pilot some of the changes before rolling them out to the wider organisation.