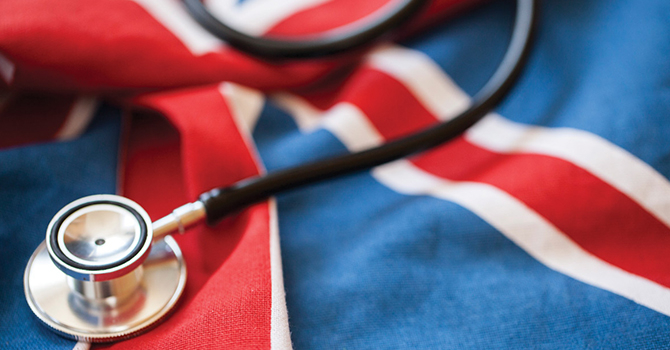 The NICE Highly Specialized Technologies appraisal acts as a gatekeeper for innovative therapies in ultra-orphan indications in the UK. As an increasing number of these therapies approach commercialization, this process is becoming even more important for patient access. In this article, we review the HST’s approach to evaluating the benefits and costs of therapies for commissioning by NHS England and critique its value in delivering on its objectives as well as what it means for the industry.

The National Institute for Health and Care Excellence (NICE) is the gatekeeper for national reimbursement across most of the UK, developing guidance and recommendations driven by their clinical efficacy and, more importantly, their cost-effectiveness. For most new therapies, NICE utilizes its Single Technology Appraisal (STA) methodology, however a few, select, medicines are able to access the HST pathway, providing a viable route to reimbursement that the normal STA process would not allow due to the ICER ceiling.

The HST process evaluates breakthrough treatments for debilitating diseases that are often fast-progressing and presenting with very high unmet medical need. However, treatments for these rare chronic conditions represent a unique proposition to payers due to their high acquisition costs coupled with evidence challenges that encompass extremely low patient numbers, limited understanding of the disease course, and a lack of healthcare resource utilization data. This has necessitated the development of innovative approaches and specialized frameworks for evaluating these technologies, ensuring their value is recognized and that patients with these conditions can receive life-changing therapies in a timely fashion.

Following its introduction in 2013, the HST process sits in parallel to NICE’s core Single/Multi Technology Appraisal (STA/MTA) processes, evaluating cost-effectiveness for technologies that would otherwise not be considered an effective use of NHS resources. The key differences between the HST and STA processes relate to:

There is a strict inclusion criteria that products must fulfil to be assessed by the HST, as shown in Figure 1, which is dictated and judged by NICE and NHS England. Despite the involvement of manufacturers in scoping workshops, there have been criticisms of a lack of transparency in the selection process leading to confusion in the planning process for manufacturers and complaints of unfair exclusion of some therapies. 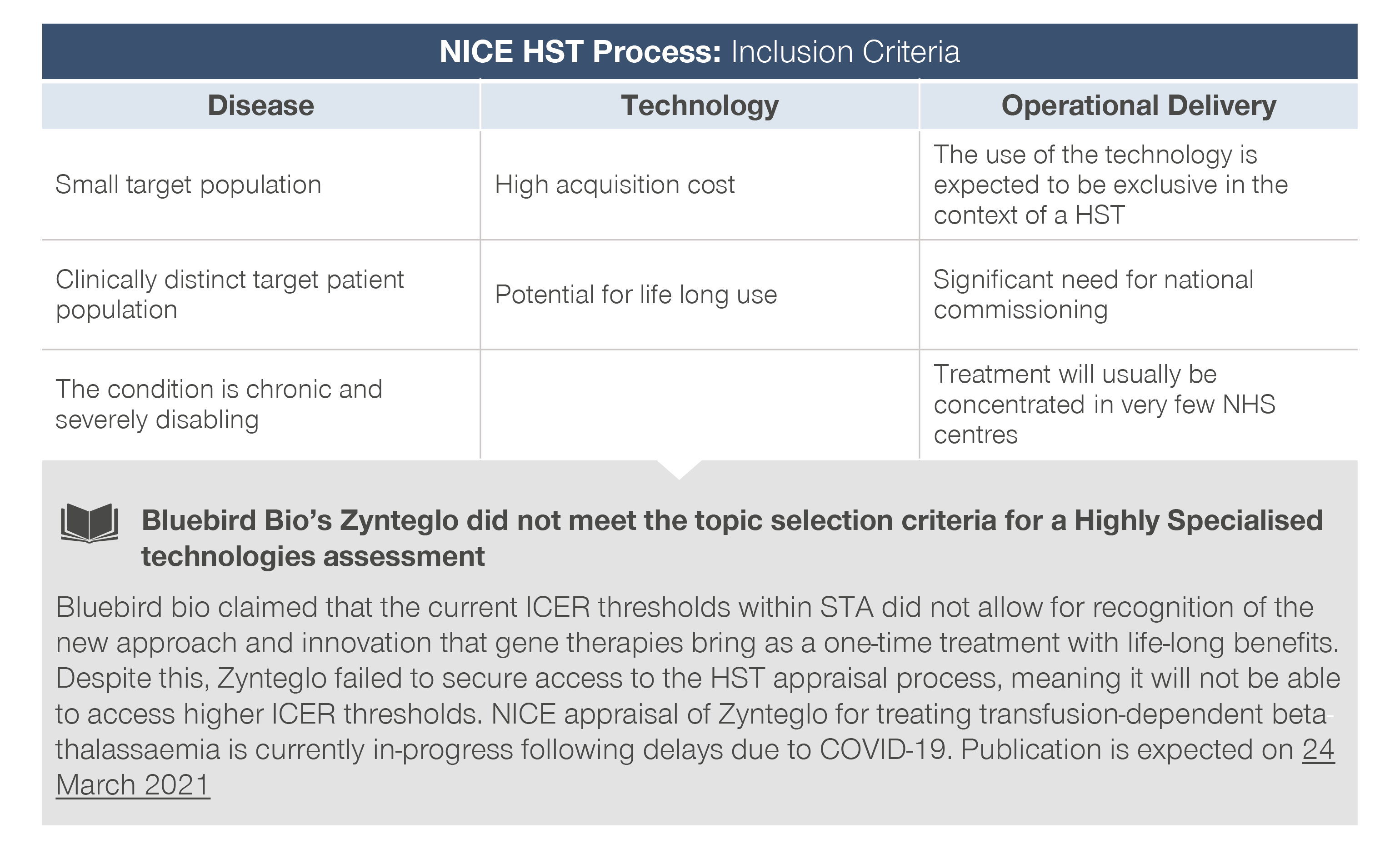 NICE has only completed and published 12 HST evaluations

Despite an annual target of producing three pieces of HST guidance, NICE has averaged 2.4 (2015-2019), with 2017 & 2019 being the only years in which the annual target was met, or exceeded. This inability to hit three HSTs annually is unlikely to derive from a single source; narrow selection criteria limit access to the HST, highly complex appraisals consume considerable resources within NICE, and some HSTs have even faced manufacturer appeals extending the appraisal timelines and preventing final guidance publication. This rate is unlikely to see substantial change in the upcoming years; one additional HST for Waylivra (volanesorsen) was published after data collection for this article was closed, and only a further three are scheduled for publication in 2021. Only with clarification of the selection criteria and expansion of the HST remit and resources are we likely to see a significant increase in access to and publication of HSTs.

At the time of data collection, NICE had published a total of 12 HST evaluations since its inception; all of which have eventually received a positive recommendation (Figure 2).

The pathway for these 12 HST were often complex, requiring multiple HST Evaluation Committee (HSTEC) meetings and eventually the inclusion of multi-faceted commercial arrangements in order to secure a positive recommendation. Such arrangements have been implemented amongst 10 of 12 published HSTs, suggesting that commercial agreements are the “name of the game” and that ICER thresholds are still below manufacturers’ wishes with respect to their published list prices.

Notable is the fact that Alexion’s Kanuma (sebelipase alfa) HST process remains ongoing despite having received a final determination with a negative decision in February 2017. Having been initiated in 2015 and undergone its first ECM in January 2016, the technology still remains “in development”; questioning NICE’s ability to give a negative recommendation in HST. 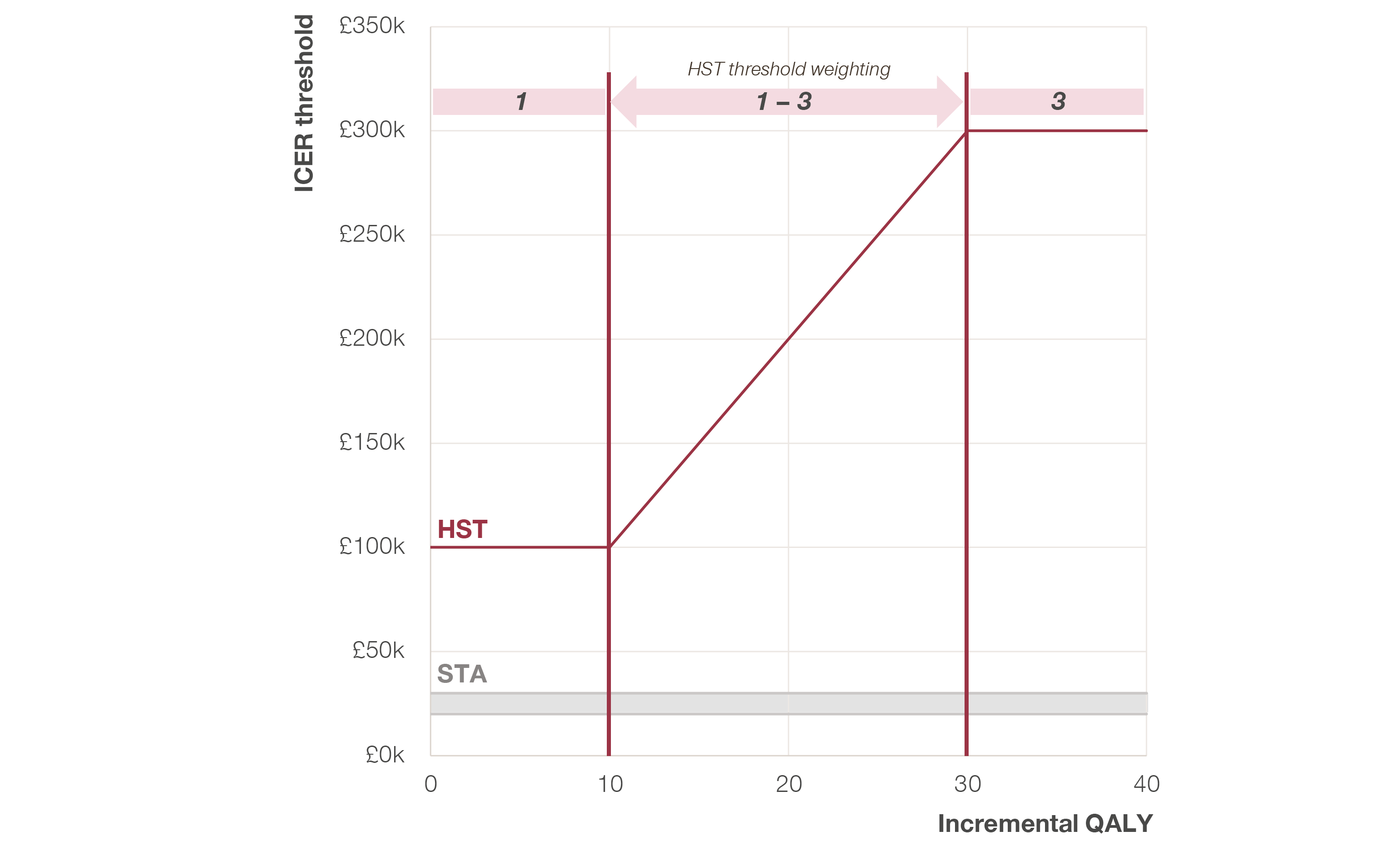 The HST appraisal process offers a sliding ICER scale, enabling greater willingness to pay for technologies which offer transformative QALY gains. Therapies able to demonstrate between 10 and 30 incremental QALY gains over the lifetime of patients receive a bonus weighting on a sliding scale between 1 and 3; theoretically enabling technologies to increase their ICER threshold up to £300,000.

It is noteworthy that in almost all weightings which have been published for HSTs, only one has been able to achieve a weighting higher than 2; the exception being BioMarin’s Brineura (cerliponase alfa), which achieved a weighting of 3 for the treatment of Neuronal Ceroid-Lipofuscinoses Type 2. This indicates that manufacturers are finding it difficult to convince the HSTEC of incremental QALY gains over 20 years, even for gene therapies indicated for inherited pediatric conditions. This inability to access the maximum ICER threshold further emphasizes the role of PAS/CAA in ensuring a positive decision and a positioning within the acceptable ICER range. Manufacturers are typically still obliged to meet willingness to pay, despite NICEs attempt to move away from the perception they are overly focused on the cost. Every HST appraisal, bar one, has been determined based on demonstration of ICERs being within the acceptable threshold; Onpattro (patisiran) being the exception (Figure 4). While most roads lead to “yes”, it’s not straightforward or permanent

Manufacturers are able to enter into two commercial agreement formats with NICE/NHSE; under a time-limited Managed Access Agreement (MAA) or under a discount provided through a Commercial Access Agreement (CAA) or Patient Access Scheme (PAS). PAS typically only provide a simple off-invoice discount, though more complex innovative agreements can be pursued under CAAs. 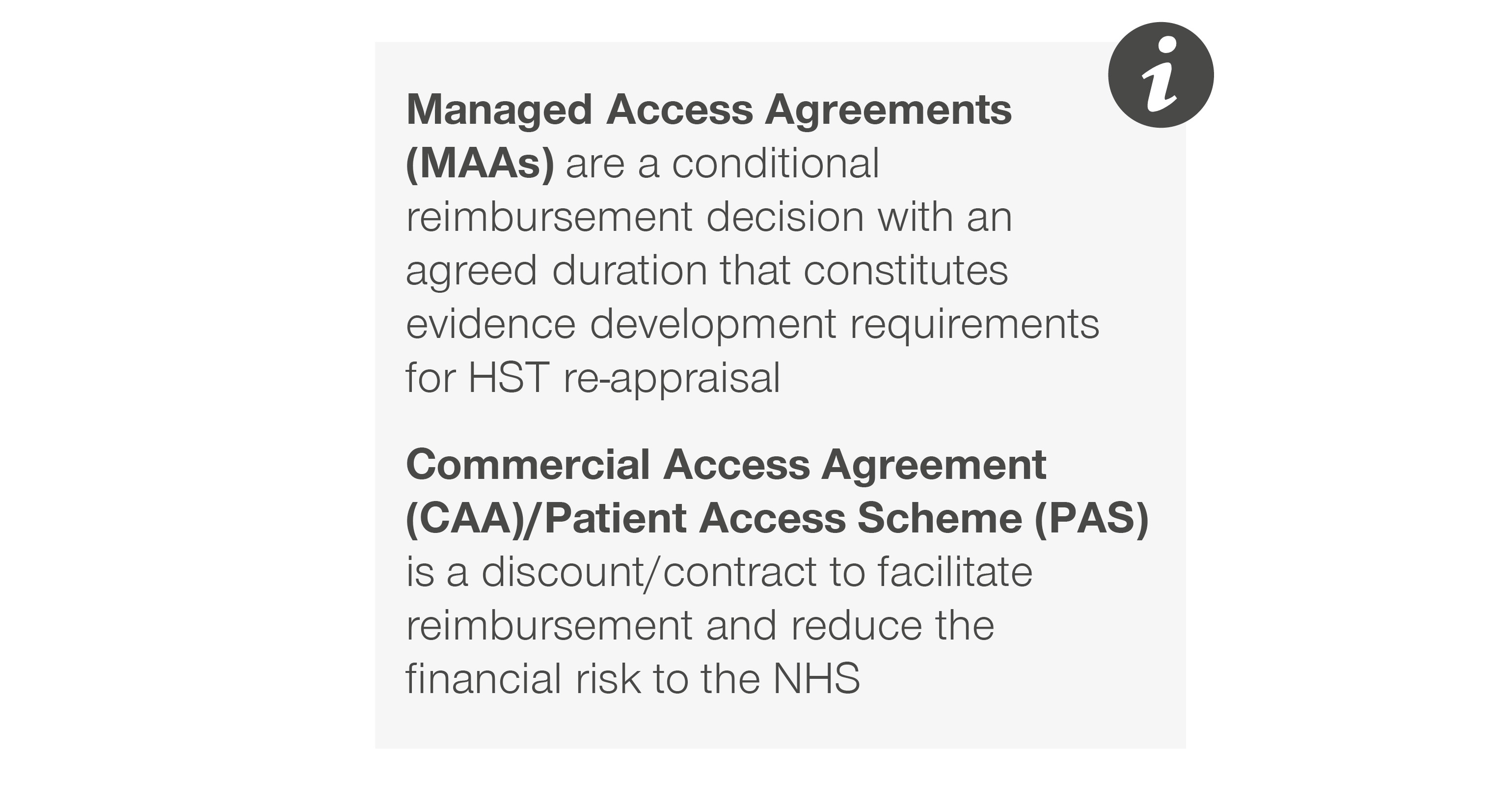 The implementation of MAA has provided NICE with the ability to recommend time-limited conditional reimbursement, even when the HSTEC considered there to be significant data uncertainties. The potential frailty in clinical trial data offered by some of these products (e.g., non-comparative, small cohort, short follow-up trials) has therefore not proven to be a deal breaker for access. This does require manufacturers to convince the HSTEC that further data collected through ongoing clinical trials, or real-world evidence from patient registries, will support the cost-effectiveness model; not necessarily a trivial task considering the low patient numbers receiving these therapies.

Four such MAA have been agreed during HST appraisals, all with a maximum duration of five years, and well in excess of the two-year target for drugs entering the Cancer Drugs Fund under MAAs. In three of these MAAs, it is notable that NICE has retained the right to review the status after two to four years, ensuring that appropriate data collection is ongoing and has the potential to enable re-appraisal at the end of the five-year timeline. This promise of data collection is usually coupled with an upfront price concession that offers more acceptable value for money in the context of the uncertainty of the clinical benefits. This suggests that the ICER thresholds considered within the HST still require significant price cuts in order to be met, which is emphasized by the inclusion of a PAS/CAA within 10 of 11 (91%) of HST appraisals.

For HST with final guidance, the median duration of assessment from evidence submission to publication is 14.2 months

As NICE and manufacturers become more familiar with this route, the process is becoming progressively efficient; having been completed as fast as 7.7 months. An increasing number of Evaluation Committee Meetings (ECMs) as a result of uncertainties in the technology submission elongate delay to market access. The inability for manufacturers and NHSE to agree on a CAA that ensures an ICER positioning within the range deemed acceptable by NICE is recognized as the most common factor in driving delay. Additional influence from uncertainties in economical modelling and a lack of long-term clinical evidence are also distinguishing rationales.

Manufacturers who are able to present robust clinical data and cost-effectiveness models avoid extensive scrutiny from the HSTEC and additional ECMs, consequently receiving a faster decision:

The UK regulatory and market access landscape is in a state of flux, from Brexit and the COVID-19 pandemic, but also from internal reviews. NICE initiated a methods and processes review in July 2019, triggered by the agreement of the new Voluntary Scheme for Branded Medicines Pricing and Access between the government and the Association of the British Pharmaceutical Industry (ABPI). This review encompasses all aspects of NICE health technology appraisals, including the HST.

For the HST, we believe that this review will primarily lead to more transparency in the topic selection process, addressing the common critique of the opaque criteria applied by NICE. Clarification of these selection criteria will enable companies to better justify inclusion and ensure they are better prepared.

This review has been divided into two distinct areas; initially, a review of the methods utilized by NICE in health technology appraisals, and a further review of the overall process. The initial changes proposed for the methods was released for public consultation in November, permitting some visibility into the potential changes, however it is noteworthy that the HST only received limited mention.

Of key note for the STA is the removal of the end of life criteria and £50k/QALY threshold and replacement with a weighted modifier similar to the HST. However, this STA modifier will be based on severity of disease, rather than the incremental QALY gain as used in the HST, and the review does not consider that there is a case for adjusting the HST weighting approach.

In February 2021, we expect the process review to be released, revealing the proposed changes to the HST topic selection criteria. As NICE is becoming increasingly reliant on the HST process to enable access to innovative drugs and the pipeline of therapies for ultra-orphan indications is growing, we expect any review to facilitate the process and accelerate time to guidance; providing additional transparency to the process will enable manufacturers to better prepare and engage with the HST process, undoubtedly permitting a more effective appraisal process and ensuring greater patient access in the UK.

In late October 2020, NICE recently published a positive recommendation for Waylivra (volanesorsen) in treating familial chylomicronaemia syndrome. The recommendation initially received a negative decision during its first ECM due to concerns surrounding clinical evidence and high cost. The process took approximately 17.6 months following EMA MA to achieve a positive decision and involved the revisal of the companies proposed CAA, so as to be considered a cost-effective use of NHS resources in the context of HSTs. There is no significant impact of this HST on the prior discussed research.