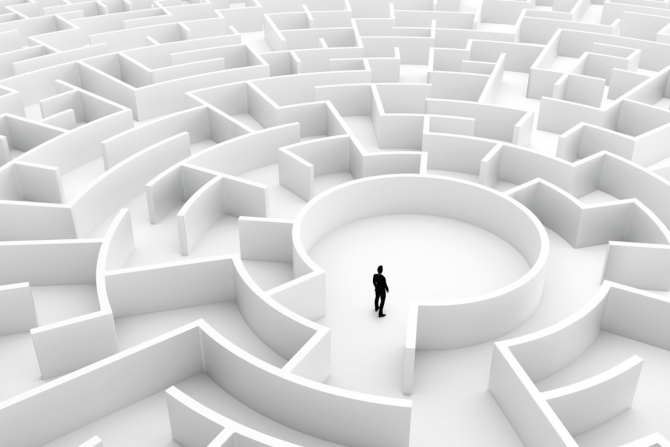 The last years have been difficult for Swiss Private Banks. Topics like negative interest rates, regulatory changes, digitalization, Fin Techs, or changing customer behavior have left its mark. As a consequence, Private Bank’s margins have decreased significantly: Between 2014 and 2017, commission margins have dropped by about 11 percent on average. The key question therefore is: Will banks be able to stop this trend or will the situation get even worse?

The number of private banks in Switzerland is diminishing each year due to closures and consolidations. In 2014, 129 private banks were registered with FINMA; by mid-2017, this figure dropped 13 percent to 112 banks.

Figure 1: Evolution of AuM, commission revenues, and commission margins of 44 Private Banks in Switzerland between 2014 and 2017

Figure 2: Overview development of AuM and commission margin of 44 Private Banks in Switzerland between 2014 and 2017

The results of this analysis clearly supports the Swiss Private Banks’ ambitions to grow their assets. At the same time, they show that following this strategy puts margins significantly under pressure.

When looking at the development between 2014 and 2017, the following three key questions come to mind:

1) Are the glory days over, where Swiss banks have been able to generate good margins with their clients? Will margins decrease even further?

The results of the study clearly show that many banks put a strong focus on growing assets. A 13.2 percent asset increase seems to be a good achievement over 3 years. However, when considering the stock market’s performance effect, the achieved growth is less impressive: Between January 2nd 2014 and December 29th 2017, the SMI has grown by 13.4 percent, the DAX by 37.4 percent and the Dow Jones by 50.3 percent.

Therefore, it becomes clear that Swiss Private Banks have been under significant pressure to maintain the current client base or acquire new clients or assets. As a consequence, they were willing to accept lower fees and heavy discounts. However, such a strong decrease in the commission margin is still alarming since the pressure as well as ambition to grow AuM has already been a challenge in the previous years. Increasing transparency requirements, new low-cost competitors entering the market or changing client preferences will further impact this trend. Several high margin products and revenue drivers are at risk and will for sure disappear in the long run. Without concrete actions, the trend of decreasing margins will keep on leading to lower overall profits.

2) How can banks stop the margin erosion observed in the past years?

Results of our study show that it is possible to increase margins although the current difficult times. However, stopping the margin erosion is neither simple nor obvious. The detailed measures depend on the bank’s specific situation and can’t be generalized. However the following three guiding principles are key:

I) Go “back-to-the roots”! Going “back to the roots” means understanding what clients really want, how they want to be served and what they are willing to pay for. In the past years, most banks have invested millions of Swiss Francs on developing new products, services, apps, or other features. However, only very few have actually asked their clients for their opinion. Almost all projects follow a purely inside-out approach and the principle: “If the project team likes it, the clients will as well!”. Unfortunately in most cases, it doesn’t work like this and the client’s opinion is not as predictable as it might seem. As a consequence, a recent Simon-Kucher study across all industries on a global scale shows that almost three out of four innovations fail to meet their targets.

Applied to Swiss Private Banks, it means answering the following questions are crucial: How do clients want to be served in the future?, which services do they really want?, or how does their willingness-to-pay for a certain service look like? There are multiple ways to get more transparency on these questions but one thing is clear: Having a better understanding of client needs and preferences, decreases the probability of losing clients, assets, revenues, and profits. In addition, it can also become a strong source of attracting new clients.

II) Bring your pricing and discount management to the 21st century! When comparing the Private Banking industry to others such as the travel, automotive or telecommunication industry, one thing stands out: There is significant room for improvement. Topics such as dynamic pricing, algorithm based pricing decisions, big data analytics or digital discount management processes have not yet really found their way into the Private Banking industry.

As an example, discounts are granted in many banks based on experience of the sales people and some competency grids. However, only very few banks have insights on the impact of a discount decision on a client’s overall margin or how the future margin compares to clients with a similar size and investment profile. In addition, discounts are often transmitted for implementation by phone calls or handwritten notes. It goes without saying that this process is neither effective nor efficient and contains a high risk for errors.

Based on previous Simon-Kucher experience, a revenue uplift potential of a state-of-the-art pricing and discount management is between 15 and 20 percent based on the current revenue and client base. Therefore, a successful implementation generates additional revenues as of day 1 and on a recurring basis.

III) Focus on what really matters! At the end of the year, what really counts are the generated profits. Of course, other KPIs such as AuM or revenue growth are also important and need to be considered. Surprisingly, only very few banks have an understanding on where these profits have actually been generated. More precisely: How much profit has been generated by which client?

Answering this question is not easy or straightforward. Nevertheless, having an understanding of the revenue and the cost basis is of high importance for any bank. It not only gives an excellent indication of the required minimum AuM for certain services, but it also helps front staff to better sell services and defend prices in client negotiations. Without having a clear vision of what the costs are to provide clients with certain services, the risk of serving clients in an unprofitable way is very high.

Recent Simon-Kucher studies show that about 30% of all Private Banking clients are not generating enough revenues to be profitable. It is obvious that exiting these clients is not a reasonable option. However, there is no doubt that identifying and monetizing these clients is needed in times of decreasing commission margins.

3) How will medium-sized banks develop in the future and will they be able to survive?

The results of the study clearly show that medium-sized Private Banks have both lost assets and revenues between 2014 and 2017. This is in contrast to both small and large banks that were able to grow assets as well as revenues. In addition, various studies and industry experts have recently raised big concerns on whether medium-sized banks will be able to survive in the future. Some people even call the area where medium-sized banks are operating the “death zone”.

From our point of view, the situation is not that clear. Medium-sized banks generally can offer “the best of two worlds”. On the one hand, they are small enough to serve clients in an individual and cooperative way. On the other hand, when having a clear profile and focus, they are also able to offer access to services that are generally only provided by large banks.

The key challenge, however, is to carve out the areas where medium-sized Private Banks want to invest and offer a broader range of services. Establishing a clear profile and value proposition is not easy. It requires a detailed assessment of the current strengths and weaknesses of the bank as well as a profound understanding of the clients’ needs. Only by combining these two perspectives and taking appropriate actions, will medium-sized banks be able to create a high service quality and client satisfaction in the long run.