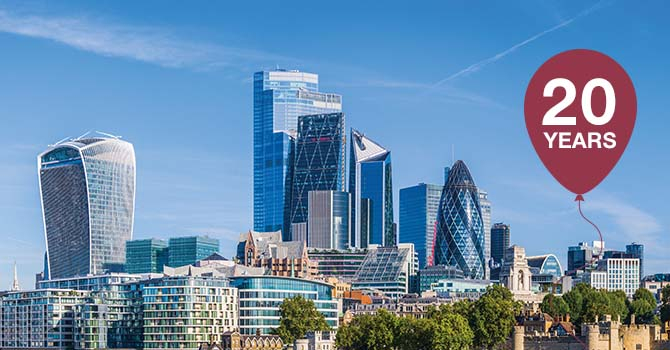 20 years ago this month the London office opened its doors, marking the start of a journey from a five-person startup to a prominent global office for Simon-Kucher. We approached six colleagues from the office’s past and present, taking a trip down memory lane and finding out what’s in store for the future. 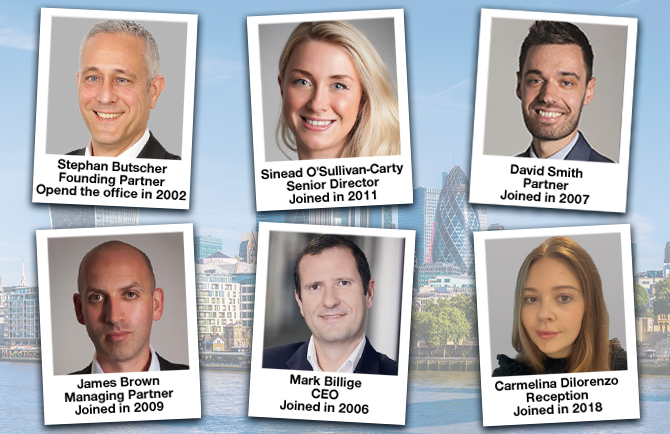 Where was the first London office and why was it opened in 2002?

Stephan: The first London office was on Kingsway, where we stayed for three years before moving to High Holborn. I think, since we had a lot of projects in the UK it was only a matter of time before we opened an office in London. But it sort of happened by accident in 2002.

Given the rise of Silicon Valley and the internet boom, Hermann Simon, our founder, was keen to open an office on the West Coast in the US. He asked me if I would be interested. Since I’d just returned to Germany from helping to set up the Boston office, I was keen to stay closer to home. So, I said: “Not really…the furthest I’m willing to go is London.”

To which he said: “Oh, that’s great! Then, we’ll open an office in London.” Literally, that's how it happened.

What was it like then? Has it changed much today?

David: I joined the office in August 2007, when we were about 10 people. So, it felt like a startup. It was very rough and ready in those days and cost conscious. Globally, the company had around 300 people, and no one outside the company really knew what we did. Even though we have 116 people now in the London office, and 1,700 globally, the culture in London is remarkably similar to what it was 14 years ago.

Sinead: I agree with David. I joined in 2011, and the office then was a bit dingy, so it was a big step when we moved to 1 Plough Place. But, as David said, we had a great team spirit then, just as we do now. As much as we’ve grown, we’re still an inclusive, social bunch who look out for each other. All the socials, pub drinks on a Friday, announcements, office meetings, and the rest has carried on from those days. The London team know how to be there for each other, both professionally and socially.

Carmelina: I’ve been here since 2018, so I’ve only ever known the office as it is now. I’d say we are a hardworking, fun, and friendly office. Even through COVID teams made sure to have virtual get-togethers and meet in person when it was safe and possible. Yes, we have lots of socials, but we also drive diversity, equity, and inclusion initiatives like Women in Consulting, mental health, and Black history. It just feels like a big family.

Stephan, Mark, and James you’ve all managed the London office at different stages of its life. What was it like managing the office when it first opened, 10 years ago, and now?

Stephan: The interesting thing about managing a small office is that you have to do everything. So, on top of business development and project management, we also had to take care of the admin side of things. That means finance, HR and recruitment, events, marketing, all this was done by our tiny team. It’s fantastic to see such a strong central functions team in London now.

Mark:  I would say it was the same for me – very people focused. From recruiting and onboarding, to working closely with office management to make sure that everything is running smoothly. But obviously, as a Managing Partner your projects continue. So, it was a lot of moving parts.

James: It’s interesting to hear your perspectives, because it drives home how much the London office has grown in 20 years. As well as the growth of the consulting team I’m proud of how much we’ve built up our wider team – with a strong HR, Finance, and Marketing teams. While I have overall responsibility for making sure that the London office is running smoothly, we have great people here who are experts in their fields and that allows me and the other partners focus on serving clients and developing the team.

Mark, I assume one of your biggest highlights working at Simon-Kucher was becoming the co-CEO in 2019. You are the first UK CEO the company has ever seen, what did that mean for London?

Mark: Firstly, I would like to say that that was an extremely proud moment for me. I’m incredibly lucky to be the CEO of such an incredible and wonderful company.

And it isn’t just a key moment for London but for the company as a whole. Although we are very proud of our German roots, we’ve been a global company for a long time. So, having a CEO outside of the Bonn headquarters is a great representation of that. When it comes to what it means for London, it’s obviously helped to raise our profile and elevate our business in the UK. While we’re far from being a startup now, that Simon-Kucher go-getter, entrepreneurial spirit from 20 years ago still lives on in London, and it’s what I aim to represent.

To continue down memory lane, does anyone have any more highlights to share?

Stephan: When we first opened the office, it was so exciting to build it from the ground up as a small, motivated team, who all shared Simon-Kucher’s entrepreneurial spirit. Obviously, a big highlight for us then was seeing our hard work succeed when we won our first big project. That was a huge milestone!

Sinead: A highlight for me was walking into one of my first World Meetings in this big ballroom in Germany with the London team. It was great to meet and celebrate with our global colleagues, showing how friendly, down to earth, and fun London is.

Carmelina: My favorite memory was the 2019 Summer Party. Obviously, everyone goes on holiday at different times during the summer months, so as an office we usually get together in August or September to catch up. In 2019, we went to Nobu. We ate our body weight in sushi and danced the night away.

Speaking of dancing the night away, Carmelina, how did London celebrate its 20th anniversary?

Carmelina: We celebrated on the top floor of the Gherkin, which is a landmark in the City with some fantastic sunset views! There were over 120 people, which was so fun. Obviously, most colleagues who are currently working in London came, but some external companies who we’ve had a long partnership with, and alumni also celebrated with us. Since the office opened in 2002, we danced to some classic 00s tunes and other bangers from the last 20 years. There were drinks, canapes, James did a welcome speech…in short, it was a big family reunion! We had a lot of fun.

What is the vision for the London office? Where do you see us in 20 years’ time?

Mark: The vision is clear, it’s to grow and still be the London that we know and love. I expect our brand in the UK to become more well-known. I mean, just look at us now compared to where we were 20 years ago, from no one having heard of us, to being a strong brand when it comes to recruiting talent and selling projects. I expect us to gain even more prestige and become one of the top consultancy firms in the UK. London is a melting pot of a city, and the nature of the city is reflected in our office. Because of that, we have a vibrant, diverse, and high energy office, and I hope that will continue as we grow.

James: In 20 years’ time, too far out to say – but our focus now is on growth. In the mid-term, we would like to hit that 200 then 500-person milestone, and how we develop to support that while maintaining the culture that makes us what we are. In the short term, this includes working through how we need to adapt to create a work environment that is conducive to hybrid working, which has become such an integral part of this post-Covid world.

David: Yes, I’m actually leading the charge on finding a new office for us that represents this next level that we’re aiming for. It’s fair to say that we’ve outgrown Plough Place, so the new office will be bigger, with a more prestigious and modern feel, reflecting both our ambitions and, as James pointed out, the new ways of working.